George of the Jungle

To capture George and kill him (failed)

Each other, Lyle Van de Groot (Their Boss), Max and Thor

George, Gorillas, being peed on by Shep

(All together) "Thank You Sir!"
Gunner, Scooter, Hobbs, Yon, and Phil are mercenaries who serve as Lyle Van de Groot's henchmen in George of the Jungle.

George of the Jungle

They only appear for a short time in the film.

They first appear, suddenly popping out of nowhere and tying George up when he is about to attack Lyle.

Lyle thanks them for their help and goes off with Ursula leaving them to kill him. However one of George's friends, the little Monkey calls the gorillas for help and after a fierce battle, they all locked up in a cage along with two poachers named Max and Thor.

George leaves them all to his pet elephant Shep who precedes to pee on them, while they all scream in horror. 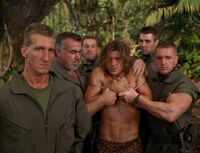 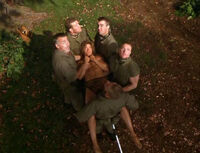 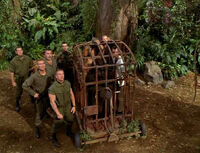 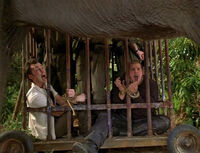 Retrieved from "https://disney.fandom.com/wiki/Gunner,_Scooter,_Hobbs,_Yon,_and_Phil?oldid=4059087"
Community content is available under CC-BY-SA unless otherwise noted.