Happy, helpful, supportive, a bit of a worrier, modest, funny

Overweight boy with a blue shirt and blue pants; he wears a red hat and has blond hair

To help Kick become the best daredevil ever

Gunther is Kick's best friend, stunt coordinator, and his wingman. He is overweight (relatively) and has a tendency to worry. Unlike Kick, Gunther does not willingly perform massive stunts alone, but will if the case requires. He also appears to have attention problems in crucial situations. His worst fear (that we have seen) is to be separated from Kick. Although Gunther said that his family from Norway wears Dutch clogs, the flag of Sweden is hanging in his room, and he wears a Lederhosen (a German National costume) in few episodes. He is also has a crush on Jackie. His parents run Kick's favourite restaurant, Battlesnax.

Gunther, like Kick, wears a trademark outfit. His clothing consists of a light blue t-shirt, denim shorts, a red baseball cap, white socks, and orange Crocs. He is shown to have natural blond hair, and is somewhat overweight.

Gunther is Kick's best friend and 'Wingman', often helping him in his stunts or adventures. He can provide distractions, and generally they spend all of their time together.

Jackie is Gunther's current crush, due to their similarities in heritage. However, this is not returned, as Jackie only likes daredevils. As a result, Kick attempted to teach him how to be a daredevil (and this succeeded) but this reverted at the end of the episode. 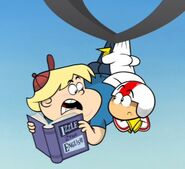 Retrieved from "https://disney.fandom.com/wiki/Gunther_Magnuson?oldid=3761670"
Community content is available under CC-BY-SA unless otherwise noted.