Still flowing
Gusto Falls is the home of Gusto Gummi and Artie Deco that appears in the animated series Adventures of the Gummi Bears.

After escaping from the sinking island with Tummi and Gruffi in the episode "My Gummi Lies Over the Ocean", Gusto and Artie move into a bluff near Gummi Glen, that is located on the side of a cliff behind a waterfall. The location is established in the episode "Water Way to Go", and the waterfall is presumably named after Gusto once he moves in.

Gusto uses the waterfall to power an elevator to take him up and down the falls, similar as to how he had used an elevator made of pulleys and bamboo to build his masterpiece, the dragon statue, when he lived back on the island.

Gusto and Artie live in a furnished alcove behind the waterfall, which serves as a makeshift apartment where Gusto does most of his work as an artist; drawing, painting, sculpting, architecture work and, on occasion, inventing.

At times, Gusto has other Gummies and even Cavin over as visitors, to either inspire him in his new artistic endeavors, or to serve as his audience.

Although Gusto and Artie prefer to live in Gusto Falls, where they are guaranteed the peace and quiet they require in order to be truly creatively productive, they often visit the Gummi Glen Gummies, and will move in with them when it's too dangerous to be at Gusto Falls, such as for upcoming natural disasters or harsh winter weather.

Sunni at Gusto and Artie's apartment 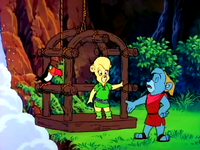 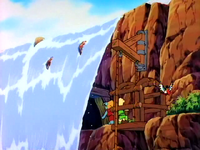 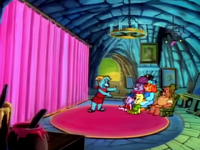 Gusto having guests over

Retrieved from "https://disney.fandom.com/wiki/Gusto_Falls?oldid=4500843"
Community content is available under CC-BY-SA unless otherwise noted.