Inventing, following her dreams, her gizmos

When her gizmos go wrong, her father's lack of support

Chef Andre (father)
Gwen is a character who appeared in the Sofia the First episode "Gizmo Gwen". She was a kitchen maid at the castle until she fulfilled her dream of becoming an inventor.

Gwen is the daughter of Chef Andre, who used to invent things until a disaster with his gizmos resulted in him quitting inventing, and since then he's tried to persuade Gwen to do the same and be a kitchen maid so she won't suffer the same humiliation he did.

As seen by Sofia, Gwen is very creative and spends her spare time in her secret workshop building wacky yet useful gizmos. Her gizmos include an Automatic Sponge, a Built-in Baker Cupcake Maker that automatically creates cupcakes, a Teeter Totter Rug Swatter that can beat the dust out of rugs, and a Bicycle Built for Tunes which plays music while peddling. Sometimes her gizmos take time to work properly and sometimes they go haywire but when they do she always manages to solve the problem.

Gwen saw her chance to prove herself when Amber's berry banquet turned into a disaster. She built an automatic bowl painter but when she put it to work for the first time, it went haywire, throwing bowls everywhere. This disaster nearly made her give up on her dream but with some encouragement from Sofia she was able to fix her gizmo and it worked perfectly. Using all her other gizmos, Amber's banquet was back on track and King Roland appointed her as Enchancia's Royal Inventor. Gwen was very happy and, for the first time ever, her father was proud of her.

Gwen is mentioned twice in later episodes of the second season. First by Sofia in the Halloween special "Ghostly Gala" where she made a witch ornament with a rotating fan to make it move in the breeze for Sofia's Halloween party. Second by Roland in "Carol of the Arrow" where she invented a grape juice making gizmo the Royal Family intended to try out for her.

"I call them my gizmos."

Gwen working on one of her Gizmos

Gwen's cameo in Elena of Avalor 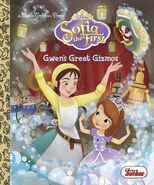