Originally, Gwen Grayson was known as Sue Tenny, a girl who was born with technopathic powers that allowed her to control technology with her mind. She was often called the "weird" student at Sky High, at the time the Commander and Jetstream (Will Stronghold's parents) were students of the same school. She was always called the "Mad Scientist" and "Science Geek" by the other students, as nobody could understand what a "technopath" was at the time. However, she was in fact a brilliant schoolgirl who invented the Pacifier, but despite her unique abilities and special powers, she was underestimated by the school and therefore made a sidekick.

Outraged and jealous by this, she hatched a plan to destroy Sky High and replace with her own academy for supervillains by turning everyone into babies and raising them to be supervillains. Sue was later unmasked teaching supervillains at the school without the teachers' knowledge. She was then defeated by the two Strongholds. During the fight, the Pacifier exploded while she was still holding it, and many presumed her to be dead. However, the Pacifier had turned her into a baby, and she was taken away and raised by Stitches, adopting the name of Gwen Grayson, and started plotting her revenge against the Strongholds.

At first, Gwen appears to be kind, friendly, sociable, and charming. As the former student body president of Sky High, she greets new students, one of them being Will Stronghold. She even apologized to Will for Penny sending out her copies to fill the seats so Will's friends wouldn't sit with them. In truth, however, Gwen is mean, cruel, vindictive, manipulative, and cunning, it was shown when she was picking on Layla at the party, and she told Layla that Will would rather hang with her than his "loser" friends.

Gwen is highly intelligent, befitting her power to manipulate technology, as she was a brilliant student in her year at Sky High when she was Sue Tenny, as she created the Pacifier. Gwen is very prideful of her intellect and power to where she became vindictive when the the school underestimated them and labeled her as a sidekick. Gwen is proven to be seductive and manipulative, posing as the teenage girl she is now at Sky High. She's also very narcissistic as she uses her beauty to gain Will's trust that led him to throw a party so she can get the Pacifier. Calculative and tactical, when Gwen had the Pacifier and turned everyone into infants, she plotted to raise and reeducated as supervillains, and constructed a device to sabotage the school's gravitational system.

She is also arrogant, as while everyone was turned into infants, she allowed her minions to take care of the rest who weren't affected, and when Will fell from the window she boasted how their last chance of stopping her. This lead to underestimate her opponents, as all three of her minions were defeated, and Will came back to discover he can fly.

Gwen's hatred towards the school has made her somewhat amoral, as she made the school fall without showing any concern for her own life.

She does to hold few students in high regard, Speed, Lash, Penny Lent, as she didn't turn them into infants. She was even confident in their abilities to let take care of her enemies. However, she doesn't seem to care about them, as when she activated the device that sabotages the school's gravitational system without caring about their lives. As a matter of fact, when she was in jail with them, she pleaded to be in solitary confinement.

Gwen seems to have a nasty temper as her minion, Stitches, always tends to do something that annoys her, which leads to her to choke him.

Gwen is a very beautiful young girl, especially for her age. Her attractiveness was such that when Will first laid eyes on her, he was briefly oblivious to the world and even to what Gwen herself was saying. She has brown hair that reaches her shoulders. She usually wears a skirt that covers most of her legs, as well as a pink sweater, but in a few scenes she wears a sleeveless shirt and a skirt that reaches her upper thighs, revealing her bottom thighs and legs.

As Royal Pain, her armor has a Medieval style to it. Her helmet reflects this style as well and it is colored gold and black. She also wears a black cape.

A few years after her adoption by Stitches, Gwen Grayson becomes Student Body President of Sky High, as well as Mr. Medulla's teaching assistant. Eventually, she recruited three cohorts: infamous bullies Lash and Speed, and a cheerleader named Penny. Gwen is understandably much more open about being associated with the latter, as they were seen eating lunch together and washing their hands in the bathroom during Power Placement. Apparently, she occasionally tries to get on students' good sides by using her powers to boost their progress in class, much to Medulla's annoyance, as when she does it for Will, he implies that she's certainly done this before.

She welcomes the new students, including the Stronghold's son Will Stronghold, who is amongst them. She knows full well that Will is attracted to her, and decides to pretend to reciprocate after witnessing his powers for herself. She subsequently spends a lot of time with him, even asking him to the School Homecoming dance, of which she is presiding.

She later devises a plan by bringing a huge party to his house and tricking him into taking her into the Stronghold's super lair, where while they share a kiss, Speed steals the Pacifier, that the Commander had kept as a trophy. After being rude to Layla and telling Will that he should hang with her friends instead of his former "losers," Will dumps Gwen as his date to the dance and ends his relationship with her. Later on while looking through his father's yearbook, Will sees Gwen's picture as well as one of her holding the Pacifier and immediately realizes something is wrong and heads for Sky High..

Later at the Dance in the gym hall, Gwen reveals herself to the crowd as arch-villain Royal Pain, which surprises the Commander, as he always thought of Royal Pain being male. Stitches hands her the Pacifier, and she turns all the heroes, teachers and staff into infants while her servants traps them in. Afterwards they load all of them into seats to be transported to the bus (though Gwen was irritated that Stitches was giving her broad instructions on what restraint).

Will Stronghold hears the speech she gives the baby Commander of her past, and apologizes to her, thinking that she is talking about her mother, but is shocked to find that she is the same person his parents fought years ago.

The two engage in a fierce battle, with Will emerging victorious by tossing her into the air and breaking her armored helmet. Royal Pain tries one last trick by detonating an electric bomb that stops the school from floating, but Will and his friends save the school from crashing. At the end, it is revealed that Royal Pain and her cohorts are in prison, with the villain begging to be put in solitary confinement.

Gwen as Sue Tenny in her previous year at Sky High.

Gwen and Will's first (and only) kiss

Royal Pain and Will fighting

"I went through puberty twice... for this!" 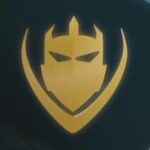 Gwen on the first day of school.