For Disney, she voiced Paine in the English version of the video game Kingdom Hearts II, and also provides voices Mrs. Lee in Handy Manny, Hoodie in Kim Possible, Fifi in Phineas and Ferb, and Jack's Mother in Special Agent Oso. She also voiced Gramma (Obaa) and Lilo in the English dub of Stitch!, and also played Bree Samuels in an episode of the Disney Channel Original Series Hannah Montana. 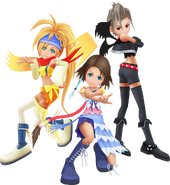 Mrs. Liao
(Star vs. the Forces of Evil)

Fifi
(Phineas and Ferb)
Add a photo to this gallery
Retrieved from "https://disney.fandom.com/wiki/Gwendoline_Yeo?oldid=3845433"
Community content is available under CC-BY-SA unless otherwise noted.