Reclaimed by the Riveras

Héctor's Guitar (previously known as Ernesto de la Cruz's Guitar) is a guitar owned by Héctor Rivera from the 2017 Disney/Pixar animated feature film Coco. It was used by Miguel Rivera, who was transported to the Land of the Dead after he strummed the guitar. The headstock which is located on top of the guitar looks similar to a skull, with a gold tooth like its original owner.

In earlier drafts of the film, Héctor's guitar was originally carried over in the Land of the Dead with Miguel (who was named Marco) when he was cursed. It had to be protected by Miguel as it was his ticket to go back to the Land of the Living. It was destroyed by Ernesto de la Cruz in the original climax but was repaired by the Riveras after Ernesto was reviled by the dead in his Sunrise Spectacular. This was altered as getting a family blessing made more sense, so the guitar remained intact in the final cut.

This guitar was a gift given to Héctor by Imelda[1] and went on to become Héctor's instrument during his tour across Mexico. However, his former partner, Ernesto de la Cruz, stole it along with Héctor's songbook after poisoning and killing him. This guitar would be continuously used by the vile murderer in his rise to the top, becoming his iconic instrument, until his performance of "Remember Me" in 1942 where he was crushed to death by a giant heavy bell. The guitar, which survived as it had been placed aside seconds prior to the incident, was then stored in Ernesto's mausoleum in Santa Cecilia's cemetery.

Much later in the present day, after accidentally breaking the photo frame of Imelda's old family photo, Miguel discovers a hidden part of the photo which showed the guitar in his faceless great-great grandfather's hand and assumed him to be Ernesto De La Cruz, later, Miguel Rivera breaks into Ernesto's mausoleum on the night of Día de los Muertos, in need of an instrument so he can participate in a talent competition taking place that night since his replica was destroyed by Abuelita. Miguel takes the guitar from its wall mountings and gives it a strum after apologizing to Ernesto's painting. However, stealing the guitar curses Miguel and he is turned into a spirit, forcing him to seek the blessing of his late family in the Land of the Dead. After Mama Imelda gives him the blessing, he is transported back to the Land of the Living but tries to take the guitar which broke the condition of the blessing - never to play music again - thus transporting him back to the Land of the Dead.

Following the film's climax, Miguel runs back home with Héctor's guitar the next morning after being transported back to the Land of the Living after being given a blessing (no conditions) by both Imelda and an almost forgotten Héctor. He uses it to play "Remember Me" which rejuvenates Mamá Coco's memories of Héctor, thus saving her father’s spirit from his 'final death'. Since then, the guitar was placed on display with Héctor's framed letters to Coco at the Rivera residence as Santa Cecilia's new attraction, following the reveal of Ernesto's crimes. On the following Día de Los Muertos, it is used by Miguel to celebrate the holiday. Héctor plays a spiritual version of his guitar in a guitar duet with Miguel.

Héctor's Guitar appears in Cars 3 as a decoration in Thomasville's Cotton Pin Bar & Grill and in Toy Story 4 as a carnival toy (specifically as a ukulele).

The guitar can be seen at Disneyland Paris, Epcot, and Disney California Adventure played by a bunraku style puppet of Miguel.

Ernesto plays the guitar to entertain people on a train.

Playing the guitar with a wink in one of his footages

Ernesto de la Cruz playing the guitar during his final song before his death.

Ernesto had placed the guitar aside. (This is how the guitar survived)

The guitar placed inside the mausoleum

Miguel notices in the picture that his great-great-grandfather holding the guitar.

The guitar hanging on the wall of the mausoleum

Miguel apologizes to Ernesto to explain his reasons for taking the guitar.

A swimming pool in the shape of Héctor's guitar.

Héctor playing the guitar while singing "Remember Me" to Coco.

"Here. This was his guitar, right? He used to play it to you?"

Mamá Coco told Miguel that Héctor that used to sing her "Remember Me" while playing the guitar.

Héctor's guitar with his letters to Coco.

A model of the guitar is seen on the upgraded version on the ofrenda.

Héctor playing the spiritual version of his guitar

The Guitar in Cars 3.

The Guitar in Toy Story 4.

Icon for guitar in Magic Kingdoms 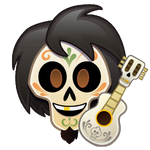