He has also been referenced as being a member of the Plus Ultra, in the film Tomorrowland.

While he did not appear, the supplementary material for Atlantis: The Lost Empire reveals that H.G. Wells frequently visited Atlantis. He was also referenced in the Disney Channel show Phil of the Future with the H.G. Wells High School being named after him. 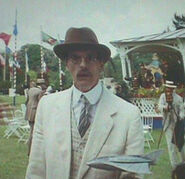 Wells in The Timekeeper
Add a photo to this gallery
Retrieved from "https://disney.fandom.com/wiki/H.G._Wells?oldid=4339758"
Community content is available under CC-BY-SA unless otherwise noted.