“"My revenge"”
―His final words, Vendettas

Hakon from Disney's Gargoyles, was the leader of a band of Vikings that traveled to Scotland for plunder.

His band first chased a group of refugees that had among them Mary and Tom to Castle Wyvern. His men were wary of attacking a supposedly gargoyle-protected castle at sundown, but Hakon convinced his men to attack, anyway, which turned out to be a mistake. The gargoyles of Wyvern awoke and trounced his men. Hakon vowed revenge and made an alliance with Castle Wyvern's Captain of the Guard to sack the castle on the next dawn, which he succeeding in doing, thanks to the Captain's sabotage. However, against the Captain's wishes, he had his men destroy all the visible members of the Wyvern clan while they slept as stone. He then left with the captured survivors of Castle Wyvern.

Unfortunately for him, six survivors of the Wyvern clan tracked his men down, and attacked them, freeing the prisoners. Hakon was faced by Goliath, at the edge of a cliff. Goliath believed that Hakon was responsible for the death of his mate, and wanted vengeance. Terrified, Hakon tried to incriminate the Captain for his crime, which caused the Captain to grapple with him. They fell from the cliff to their deaths.

Their bodies were dead, but their spirits remained. Their souls were bound to the earthly plane by the magical power of a monolith in a cavern nearby that had served as the lair of the Archmage in 984 AD. The Captain and Hakon hated one another but decided they hated Goliath more for causing their deaths. They waited 1001 years for Goliath to return, gaining mystical power from the monolith.

In 1995, Goliath returned, arriving there on the first stop of the Avalon journey. Along with him were Elisa Maza, Angela, and Bronx. Hakon and the Captain used their power to create illusions to torture Goliath and lure him to the monolith proper, where their power was the greatest. There, they first created animated stone statues resembling the slain members of the Wyvern clan to attack and torture Goliath with, but they were found out when they mistakenly created a statue of Demona, who had, unknown to them, survived the massacre.

Hakon and the Captain then used the power of the monolith to drain Goliath's life force to replenish their own, making him into a ghost while they became flesh and blood once more. However, the Captain had a change of heart, and attacked Hakon, disrupting the draining process, returning Goliath to normal, and destroying the monolith. The Captain, having atoned for his crimes and now freed of the "shackles of guilt and hatred" that had held him to the monolith, passed on to the afterlife. Hakon, on the other hand, was trapped within the shattered monolith, alone, "without anyone to hate."

Luckily for Hakon, he had a link with one of his present-day descendants, a former human, now mutate, known as Wolf. This link, forged of their common hatred of and desire for revenge upon Goliath, drew Wolf to the cave where Hakon was imprisoned. The two joined forces to gain revenge on him. Hakon linked himself to a battle-ax, and Wolf took him to Manhattan. There, they attacked Goliath and Hudson. First, Wolf attacked them on his own. When he was defeated, Hakon took over his descendant's body and used it and his supernatural powers against the pair of gargoyles. Despite the fact that Hakon/Wolf had Goliath and Hudson on the run, Wolf didn't like having Hakon in his body and forced him out. Hakon and Wolf confronted Hudson and Goliath in a junkyard, and Hakon eventually faced Hudson one-on-one. Hudson tricked Hakon into getting the battle-ax stuck in a garbage compactor, where it was destroyed. With his link to the earth plane severed, Hakon's spirit dispersed. 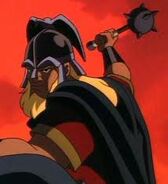 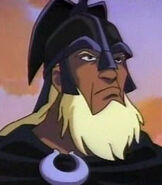