Harold Joe "Hal" Rayle is an American actor and voice actor who has done several roles for both animation and live action movies. Some of his well-known roles include Raphael in the 1980s Teenage Mutant Ninja Turtles animated series (and reprised the role in the 90's spin-off), and Biff Tannen in the Back to the Future animated series and Lieutenant Commander Steele in SWAT Kats: The Radical Squadron.

For Disney, he voiced Miss Piggy in the live-action animated show, Little Muppet Monsters, Otter Firstmate in the animated show, TaleSpin, Hammerhead Hannigan and other characters on Darkwing Duck, and Deep Six in Quack Pack. He also did additional voices in Bonkers. 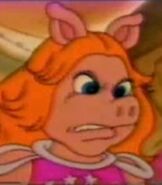 Hammerhead Hannigan
(Darkwing Duck)
Add a photo to this gallery
Retrieved from "https://disney.fandom.com/wiki/Hal_Rayle?oldid=3928734"
Community content is available under CC-BY-SA unless otherwise noted.