2013 - present
Halle Lynn Bailey is an American actress, singer, and writer, known for her roles in the film, Last Holiday (2006), and the Freeform television series, Grown-ish (2018).

For Disney, she wrote the song "Warrior", for the 2018 film, A Wrinkle in Time, which she performed with her sister, Chloe. She also appeared as herself in Austin & Ally and played a choir member in Let It Shine. She will also play Ariel in the live-action remake of The Little Mermaid 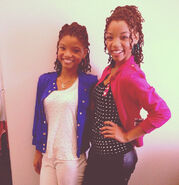 Choir Member
(Let It Shine)
Add a photo to this gallery
Retrieved from "https://disney.fandom.com/wiki/Halle_Bailey?oldid=4135636"
Community content is available under CC-BY-SA unless otherwise noted.