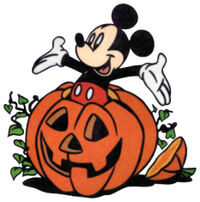 The Halloween Events at Disney’s theme parks are varied as the locations. These events are usually held between September and early November running through the Halloween season. In all cases, Mickey, Minnie, and other park-specific characters have worn special Halloween-themed costumes.

At Disneyland Park, Halloween Time features the “Haunted Mansion Holiday” overlay at The Haunted Mansion featuring characters from The Nightmare Before Christmas, continuing into Christmas. Starting in 2006, the main theme park was decorated with pumpkins, including a 12-foot Jack O'Lantern shaped like Mickey Mouse in front of Main Street USA and smaller pumpkins around the Walt Disney-Mickey Mouse “Partners” Statue representing each of the theme lands with a character from Disney or Pixar canon. Fantasyland is represented by Tinker Bell, New Orleans Square by Jack Skellington, Tomorrowland by Buzz Lightyear, Frontierland by Woody, Critter Country by Winnie the Pooh, Toontown by Roger Rabbit, and Adventureland by Tarzan. A celebration of “Dia de los Muertos”, Mexico’s “Day of the Dead” in Frontierland was added in 2007. Jack and Sally began making appearances at the park in 2008, and in 2009, a new Halloween-themed fireworks show, "Halloween Screams", "ghosted" by Jack Skellington of The Nightmare Before Christmas (voiced by Chris Sarandon) utilizing a variation of the "HalloWishes" soundtrack and featuring a puppet version of Jack's dog Zero flying over Sleeping Beauty Castle was added, along with the "Ghost Galaxy" layover for Space Mountain, imported from their Hong Kong sibling park.

A hard-ticket event, “Mickey’s Halloween Party” (known formerly as “Mickey's Halloween Treat” from 2005 until 2007 and "Mickey's Trick-or-Treat Party" form 2007 and 2008) is held allowing guests to dress up in costume and go trick-or-treating for candy supplied by Mars, Hershey's and Nestle at stations manned by costumed cast members. In addition, the “Golden Dreams” theatre hosted an all-villain show called “Golden Screams”, which was discontinued after 2007 as the theatre was closed in 2008 and was razed to make way for The Little Mermaid: Ariel's Underwater Adventure dark ride, opened in 2011. The Mickey’s Halloween Party event was moved from Disneyland Park in 2005 to DCA after an hiatus, and returned to the main park in 2010 in order to make room for elecTRONica at first, and as of 2012, the Mad T Party.

At the Magic Kingdom, a hard-ticket event called “Mickey's Halloween Party” (formerly called "Mickey's Not-So-Scary Halloween Party) features Mickey's Boo To You Parade, featuring a pre-parade ride by the Headless Horseman, which was altered in 2014 with the addition of Wreck-It Ralph and Vanellope, a stage show featuring Disney’s villans called "The Disney Villains Mix and Mingle", which was revamped in 2011 to add Dr. Facilier from The Princess and the Frog as host, other character meet and greets, dance parties, including a dance party at the Diamond Horseshoe with many villains as of 2014, trick-and-treating, and a Halloween-themed fireworks show titled “Happy Hallowishes: A Grim Grinning Ghosts Spooktacular in the Sky”, based on the Haunted Mansion attraction. Like Halloween Time at DLR, guests are encouraged to dress up in costume and join in the fun.

In addition, Downtown Disney in Lake Buena Vista has special Halloween events on October 30 and 31.

Since 2005, the theme of the Halloween events was a battle between pumpkin men trying to paint the main park orange and pink witches freezing most of them, however in 2008, the Pink Witches lost the battle. In 2006, Stitch of Lilo & Stitch fame was added as the central character of the activities, but won't be doing so in 2008. Other events have included truning Frontierland into “Halloweenland”, stage shows and parades. The 2007 events (which were repeated in 2008 through 2010) includes a special preliminary event prior to the “Once Upon A Dream” 15th Anniversary parade, stage shows with a group of musicians called “The Bat Boys” and Goofy making pumpkin soup at Frontierland/Halloweenland along with a stage show in front of Sleeping Beauty’s Castle, featuring Disney Villains along with the aforementioned Pumpkin Men, and for the first time, Jack Skellington and Sally from Nightmare Before Christmas. The athmosphe changed in 2011 with a new family-oriented theme including pumpkin designs imported from Disneyland and Walt Disney World along with ghosts.

An annual “Hard Ticket Event” soiree (party) is held every October 31 featuring a fireworks show with a Halloween theme; the 2007 theme a tribute to Disney villains. New for 2008 was their version of the “Mickey’s Not-So-Scary Halloween Party” hard ticket event (the French title being “La fete Pas-Si-Trouille de Mickey”, which in English means “Mickey’s Party Without Any Jitters”) and is held only in the Fantasyland area, lasting until 2012..

At Walt Disney Srtudios Paris, a darker-themed event, titled "Terrorific Night" was added in 2010, but was discontinued in 2013. Children under the age of 12 were discouraged from being at this event

Every year, Tokyo Disneyland has a new themed Halloween Parade and other events. In 2008 TDLR continued with its’ 25th Anniversary “Jubilation” parade, but also added two parades - daytime and nighttime - featuring Disney's most imfamous villains as part of the silver anniversary events. In addition, the Haunted Mansion Holiday Nightmare layout is in place through New Years weekend. New for 2009 at Tokyo DisneySea will be a Venatian-themed Halloween festival four times daily, and at both parks, an event called "Night High Halloween" will be held.

The first Halloween event at Hong Kong Disneyland was Disney's Halloween in 2006. The event featured a mini-parade with the characters in costume, a band, and dancers.

In 2007, Disney's Haunted Halloween featured some haunted experiences including a haunted maze called “Main Street Haunted Hotel”, the new home of the former Rocky Point Haunted House in Salt Lake City, Utah. Also, a nighttime parade called Glow in the Dark Halloween Parade was added, which featured five brand-new floats. In addition, there was a Ghost Galaxy layout for Space Mountain (since imported to Disneyland for their Halloween activities) and a talking haunted tree in Sleeping Beauty Courtyard akin to Disney World’s much friendlier talking palm tree at Animal Kingdom.

The park continued to celebrate the Halloween with some new scary experiences in 2008, including two new haunted attractions in Adventureland: "Demon Jungle" and "Adventureland Haunted Trail". Also, some add-ons were introduced in "Main Street Haunted Hotel". Tomorrowland was invaded by "ailens" in 2009. In 2010, Disney's villains were "taking over" as Maleficent hosts a "Scare in the Sky" fireworks spectacular and Main Street became even more haunted. The Headless Horseman will be the central theme of the 2011 activities, including rides in the park, and a theme area in Adventureland.

Retrieved from "https://disney.fandom.com/wiki/Halloween_Events?oldid=3812803"
Community content is available under CC-BY-SA unless otherwise noted.