Halloweentown High
Halloweentown II: Kalabar's Revenge is a 2001 Disney Channel Original Movie released for the holiday of Halloween. This is the second in the Halloweentown series.

Witch Marnie, has just spent two years with her grandma Aggie. While hosting a mortal neighborhood Halloween party, Marnie tries to impress a cute new boy, Kal by showing him Aggie's magically-hidden room. Unbeknownst to Marnie, Kal is actually the son of Kalabar and does take the opportunity to steal Aggie's spell book, slipping the spell book into his pocket.

Soon Aggie notices unwelcome magical symptoms. She and Marnie travel to Halloweentown to investigate and fix the problem before the portal between Halloweentown and the mortal world, open only on Halloween, closes at midnight. They discover that the whole town has been turned into a made-to-match black and white silent film and that the inhabitants have been turned into humans (or rather, into what Halloweentownians see as humans being: dreary and monotonous beings concerned only with such things as sensible dress or sorting socks). The victims include Marnie's goblin friend Luke. Aggie diagnoses this as the "Grey Spell."

Aggie contacts grandson Dylan back home for a spell from her book, and Dylan and Sophie discover the book is missing. Marnie and Aggie learn that Kal is actually a warlock, and the son of their enemy Kalabar (from the previous movie). Kal did not break the Code of Merlin, a way of life for magical beings, by stealing Aggie's book to limit her ability to hinder his attempt to complete his father's revenge on both Halloweentown and the mortal world. Aggie believes that if he is willing to go that far, then there is nothing that they can put past him.

Aggie searches for her spare copy of her spell book at her house in Halloweentown, but it is missing and she despairs. During a conversation between Aggie and Marnie, about another way to reverse the "Grey Spell," Marnie inadvertently says the spell "Trap a" which reverts Luke back to his goblin form. Unable to explain the spells' reversal, the group soon believes that it is temporary. The trio travel to the lair of the well known junk magnet of the universe, Gort, who acquires lost items from both realms. He had been discolored by the Grey Spell and had sold the spare spell book some time ago. Unfortunately Aggie loses her color and sorts socks with Gort and everyone is trapped in his house. Marnie uses time travel to go back before the black and white happened. Unfortunately, when they get there, they learn that Gort had sold the spare spellbook to Kalabar about 50 years prior (as Luke says, "Kalabar must have been working on this world domination thing for decades."). By remembering what things Marnie had been, hastefully, saying back when Luke returned to (Goblin) normal, they learn that, in her haste, she said "trap a" as "trapa", which is "Apart" spelled backwards. Despite being able to use a wizard's lost time-line, to speed up getting back to the present (as, due to the fact that, no matter what time period it is in Halloweentown, time keeps moving in the mortal world). They arrive too late and the portal shuts tight with a big, strong, metal, bulletproof door, trapping Marnie in Halloweentown.

Kal, having enspelled Halloweentown into a monochrome talkie caricature of the mortal world, is now at work enspelling the mortal world into a Super Technirama 70 monster movie caricature of Halloweentown. Sophie and Dylan realize that Alex, believed to be Kal's father, was actually a golem intended to distract Gwen. To make their mom believe that, Sophie creates a fly. Alex, being made of frogs, eats the fly and ends up getting dispelled by a furious Gwen. Being informed of Kal's plot to turn humans into the creatures they "mock" on Halloween, Gwen tries to take off her mask, but it doesn't work. Kal has made the mask stick to her face. He then continues his spell; they are to late as chaos as endured throughout the mortal world. Dylan and Sophie hid from the monster humans.

Marnie, trapped in Halloweentown, frees Aggie, but refuses to accept they are locked in. She contacts her siblings through a shrunken head, and they create a new spell that forces the portal between Halloweentown and the mortal world to reopen permanently. an anger Kal confronts Marnie who mocks him of his power to keep everyone a part and demands for the spell book. Kal produces living slimy servant vines of dark magic to the cruelty in his heart and takes both spell books in an attempt to prove his own superiority, which fails when Marnie takes them from his hands. Kal then is sent away by the vines, apparently according to his own desire, and the family breaks the spells. Aggie undoes all the damage then after a talk with Gwen head to head, setting things right in both the mortal world and Halloweentown. 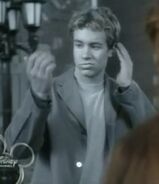 An irksome grayish version of Luke