London, England
Hamilton Gooding and Templeton Frye are minor characters and lawyers for the Fidelity Fiduciary Bank who formerly worked under William Weatherall Wilkins in the film Mary Poppins Returns.

Gooding and Frye appear in the beginning of the film telling the Banks' maid, Ellen, about a Notice of Repossession, just as Michael Banks approaches them telling him that their business can't wait. They introduce themselves to him, telling him that he took out the loans with the Fidelity Fiduciary Bank to his home just as Gooding tells him to pay the entire loan in full to avoid getting the house sold because if he does not pay by Friday at midnight, the bank will repossess the home. Just as they tell him to know where the document is, they also tell him to find the certificate by midnight just as they leave.

Gooding and Frye's animated counterparts, the badger and weasel, appear during the musical number "The Royal Doulton Music Hall" just as they greet the group. At the end of the animated sequence, the wolf, alongside the badger and weasel, are shown to be thieves who are stealing the toy giraffe, Gillie, just as Michael's children, John, Annabel, and Georgie, chase after him with help from Shamus and Clyde and rescue Gillie from being stolen.

At the bank, Gooding and Frye are asking Wilkins if Michael is an employee while Penny Farthing talks to him who asks her to give him tea to which she agrees. Exploring his nature, John, Annabel, and Georgie realize he is identical to the wolf from the animated sequence while they tell Michael about that.

Furthermore toward the end of the film as Big Ben is about to strike midnight as Jack tries to stop it from doing so, Gooding and Frye notice this just as they lock the bank door. Jane and Michael enter the bank and face Wilkins after Gooding and Frye hear too much pressure. Fortunately, Wilkins' uncle, Mr. Dawes Jr., arrives and confronts him for trying to deceive the Banks family, telling Gooding and Frye to take him away. They later appear during the musical number "Nowhere to Go But Up" where they float up holding a balloon together (Gooding's balloon went down like Wilkins' did so he had to hold onto Frye whose balloon went up). 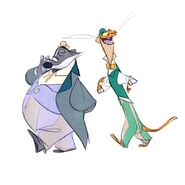 Gooding and Frye as their animated counterparts by James Wood 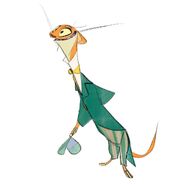 Frye depicted as a weasel 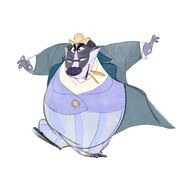 Gooding depicted as a badger 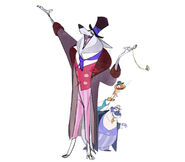 Concept art on their badger and weasel form 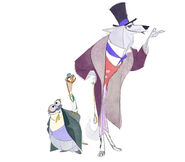