King Edmund
Hamuel is King Edmund's pet raven in Tangled: The Series. He's kind of derpy, always crashing into things, getting lost in boots and trying to flirt with a bird-shaped table decoration.

Hamuel is one of Edmund's ravens that keep him company in the Dark Kingdom and had kept on eye on his son, along with bring Edmund items that belong to him until they left track of the lost Dark Kingdom prince. Since then Hamuel stayed by Edmund's side.

Hamuel is a perpetually clumsy and dim-witted raven who is prone to failing at even the most basic and simplistic tasks.

After Edmund tells Eugene that he is his father in "Destinies Collide," Hamuel hands the king one of the Flynn Rider wanted posters that the king shows his long lost son, before they sit down to have a meal, where Hamuel mistakes a bird-shaped table decoration for a real bird and had began to do a mating dance until he fell off the table. As Pascal goes to search for Eugene in the castle, Hamuel spots the chameleon and chases after him until Pascal manages to lose the raven.

In "Return of the King," Hamuel stays by Edmund's side as the king gives Eugene a sash that has been pathed down in their family and wanted to give it to Eugene as its new heir. While Eugene ponders over the sash and the father who abended him as a baby, Rapunzel reminds Eugene that Edmund's only friend is a bird who can easily get lost in a boot, which makes Edmund a lonely man; while Hamuel flying around with his head stuck in Eugene's boot proved a point. The next morning, after Eugene learns that the sash has been stolen, Hamule joins Eugene and Edmund in their task of retrieving it from the thief, while Edmund has faith in his feathered friend Eugene sees Hamuel as a stupid bird who keeps crashing into objects that are in his flight path without bothering to fly around them. Like he hasn't noticed that they are there. After Eugene learned that Edmund was the one who took the sash in order to have a father-son bonding trip and gets mad over it, Edmund consults with Hamuel about his actions until the Kings get captured by the Stabbington Brothers, while the raven was send to alert Eugene of the danger his father is in. Hamuel later gets trapped in a cave with Eugene and as Domino tries to get Eugene to see that is in Edmund's bag of trinkets, Hamuel chases after the light that is shining from it until he knocks the bag to the ground; which allowed Eugene to see that they are items from his childhood and that Edmund was keeping tabs on him. After Eugene was saved by Rapunzel and their horsey friends, they work together in saving Edmund from the Stabbingtons. Hamuel was later seen perching on Edmund's shoulder after the King was saved.

Shortly after Rapunzel and her friends find a treasure map while fixing up the damaged throne room in "The Lost Treasure of Herz Der Sonne", the princess decides to have a treasure hunt race where everyone acts in a team of two, that her invention "H.A.T." sorts them into. Much like how it had parted Pascal up with Maximus, H.A.T. teamed Hamuel up with Varian's raccoon Ruddiger, who tried to ruin Maximus's chances of winning, if it wasn't for the raven messing up the raccoon's traps and getting his partner trapped in them instead.

In "Day of the Animals", Hamuel joins Rapunzel, Varian, Kiera, Catalina and their animal friends, Pascal, Maximus and Ruddiger on a trip to return the last of the stolen goods from the girls' thieving days. The episode begins with Hamuel flying upside down while Pascal uses his legs to hang onto the raven's claw feet as they sore through the air, until the raven crashes into the cart and gets a shell-shaped pendent to fall out of the treasure sacks. As the animals fight over an apple their human friends end up getting trapped in the magical pendent which later gets stole by Dwayne. Rapunzel reassures her young friends that their animal friends will be able to help them, as they each have their own skills, but they weren't so sure about how helpful Hamuel could be in their current situation, and were having trouble thinking about nice things to say about the raven. In the end, however, Hamuel helping his animal allies allowed them to free Rapunzel and the others from the shell once they returned it to the sea and Rapunzel thanks them for their help. 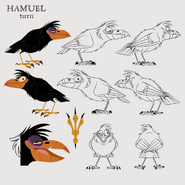 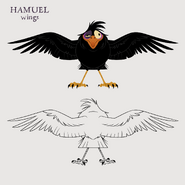 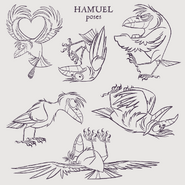