Azaria has also portrayed characters in live-action films, such as Victor "Animal" Palotti in Godzilla, a cameo as young Patches in DodgeBall, Agador Spartacus in The Birdcage, and Kahmunrah, along with the Thinker and Abraham Lincoln, in Night at the Museum: Battle of the Smithsonian. Additionally, he played Gargamel, the main antagonist of the live-action Smurfs films, as well as their animated specials. He currently stars as Jim Brockmire in the IFC sitcom Brockmire.

For Disney, he portrayed Albert Freedman in the 1994 Hollywood Pictures film, Quiz Show, Steve Lardner in Grosse Pointe Blank, and Charles Danner in Mystery, Alaska. He also played Marc Blitzstein in the 1999 Touchstone Pictures historical drama, Cradle Will Rock, voiced Goofy in The Simpsons in Plusaversary, and played a detective in Pretty Woman.

Goofy
(The Simpsons in Plusaversary) 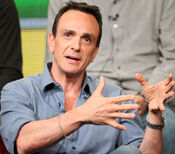 Hank Azaria speaks at the Free Agents panel at the 2011 Summer TCA Tour.

Hank Azaria and his wife, Katie Wright attending the Turnaround for Children's Impact Awards in April 2014.

Hank Azaria speaks at the Brockmire panel at the 2018 Winter TCA Tour.
Community content is available under CC-BY-SA unless otherwise noted.
Advertisement