In 1953, the same year that Peter Pan was released, Conried also voiced both Thomas Jefferson and a crook in Ben and Me, and a prosecutor in The Story of Anyburg, U.S.A. in 1957. Although he was replaced by Taylor Holmes for the voice role for King Stefan in Sleeping Beauty, he was the live-action performance model for Stefan and recorded a few dialogues and possibly as the uncredited voice of the Royal Herald, though it is still unknown to this day who provided the voice. He also played the Magic Mirror in some of Walt Disney's television programs. In another television episode, The Goofy Success Story, he voiced J.B., the studio mogul. He even played Professor Whatley in The Shaggy D.A., Bigger-Than-Life in "Major Effects", and Chief Dr. Heffel in The Cat from Outer Space.

Thomas Jefferson
(Ben and Me)

Prosecutor
(The Story of Anyburg, U.S.A.) 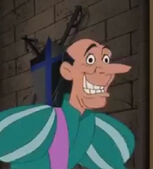 Chief Dr. Heffel
(The Cat from Outer Space)
Add a photo to this gallery

Conried as he appeared in Mickey's 50.

Conried modeling for the role of Captain Hook.