For Disney, he composed the music for The Lion King, Muppet Treasure Island, Cool Runnings, The Lone Ranger, all of the Pirates of the Caribbean films, and X-Men: Dark Phoenix (as part of 20th Century Fox's buyout) for which he earned an Academy Award for Best Original Score.

Hans Zimmer at premiere of Pirates of the Caribbean: At World's End in May 2007.

Hans Zimmer at his Hollywood Walk of Fame ceremony in December 2010. 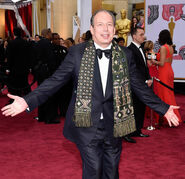