Dreaming Up!
Happiness is Here Parade was a daytime parade from Tokyo Disneyland that ran from 2013 to 2018.

Starting March 21, 2014, the parade went on without show stops and removed the "30" from the final float.

After the parade was replaced with Dreaming Up!, the Mickey Mouse drum toy from the opening unit was relocated to Disneyland and used for the returning daytime parade Mickey's Soundsational Parade, in honor of Mickey Mouse’s 90th birthday celebration.[1]

The Finding Nemo and Toy Story floats from the Joy of Friendship Unit were relocated to Hong Kong Disneyland and used for Pixar Water Play Street Party!.

The show-stop music with five songs (Tokyo Disneyland is Your Land, Mickey Mouse March, Heigh Ho, It's a Small World, and the last lyric of Happiness is Here chorus) returned during the Special Greeting after reopened the park after being temporarily closed during the ongoing COVID-19 pandemic. 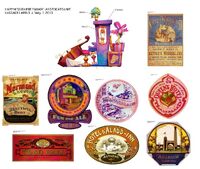 Concept Art for The Aristocats Unit 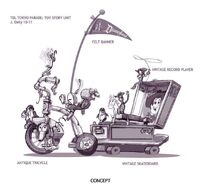 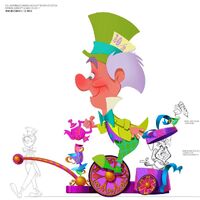