Hare In My Soup

Hare In My Soup was a cancelled short starring Roger Rabbit, planned as the fourth in his short series, following the release of Trail Mix-Up.

It was cancelled midway through production as a result of the deteriorating relationship between Disney and Amblin.

Roger Rabbit works as a waiter in a fancy restaurant, only for his antics to continually anger the manager. 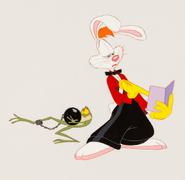