Aladdin and the King of Thieves

Dark Pink one: She has short black hair, fairly dark skin and an hourglass figure. She also has a long dark pink bedlah pants, dark pink bedlah top that shows her breast cleavage and bellybutton,dark pink arm bands and dark pink veil on her face. She's the only one of the three that has a beauty spot on her left cheek.

Lavender one: She has short black hair, fairly dark skin and an hourglass figure. Shehas a long lavender bedlah pants, lavender bedlah top that shows her breast cleavage and bellybutton, lavender arm band and lavender veil on her face. She has the shortest hair of the three.

They appear to live in some type of massage parlor with a manager. They know Aladdin when he's a street rat but they don't sympathize with his plight. (One Jump Ahead). When Aladdin shows up in town as Prince Ali, they swoon over him and are very impressed with him as he is presented by Genie (Prince Ali ).

Aladdin and the King of Thieves

They appear in Genie's song, There's a Party Here in Agrabah and also they were invited by to Aladdin's and Jasmine's wedding. 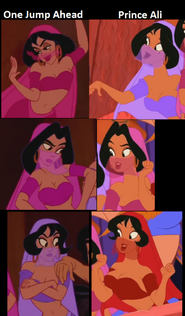 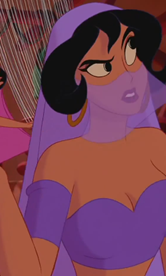 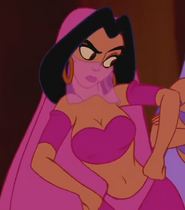 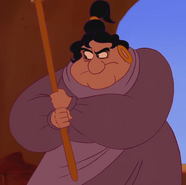 The Manager of the Massage Parlor 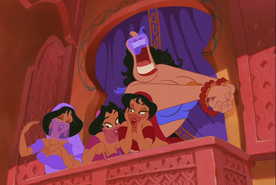 The Girls on their Balcony during the musical number "Prince Ali"
U.png
As they're seen in Prince Ali
Fff.png
In Aladdin and the King of Thieves 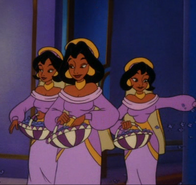 Retrieved from "https://disney.fandom.com/wiki/Harem_Girls?oldid=680302"
Community content is available under CC-BY-SA unless otherwise noted.