Neck 'n' Neck
Harem Scarem is an animated short starring Oswald the Lucky Rabbit released on January 9, 1928. This is one of several Oswald shorts that are "lost", though drawings from a small part of the film survive. The drawings were compiled by Disney into a video clip in 2012 as a D23 promotional featurette to help celebrate Oswald's eighty-fifth anniversary. The short was directed by Walt Disney and animated by the unit of Hugh Harman and Rollin Hamilton.

While crossing the desert on a stunt camel, Oswald is attacked by a large bird. After vanquishing it with the help of the camel, Oswald attaches the bird's detached wings to the camel's sides, resulting in a speedy arrival at Oasis Bar, a Moroccan cafe. While there, a hula-hula charmer fascinates Oswald. Their time together is interrupted, however, by a sheik who arrives to kidnap the girl. Oswald, on his camel, pursues the sheik, and after a wild ride, saves the girl from the sheik's clutches.[2] 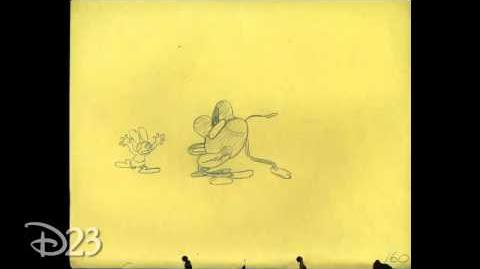 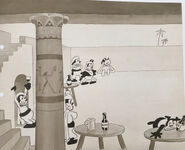 Cantina background.
Add a photo to this gallery

Retrieved from "https://disney.fandom.com/wiki/Harem_Scarem?oldid=4225101"
Community content is available under CC-BY-SA unless otherwise noted.