Disney Wiki
Register
Don't have an account?
Sign In
Advertisement
in: Characters, The Nightmare Before Christmas characters, Monsters,
and 10 more

Hammer
Harlequin Demon is one of the minor characters in the 1993 film The Nightmare Before Christmas. He is voiced by Greg Proops.

The Harlequin Demon, like the rest of the residents of Halloween Town, loves to scare others and take part in big events and help out in their preparation. Due to being a monster, he has no trouble with frightening and disgusting things and gladly enjoys messing around with dead animals corpses, however he has very little understanding of nice and pretty things due to being a resident of Halloween Town. He also seems to be skilled at turning rotting animal corpses into wearable hats, even considering himself a genius regarding this task.

He has many sharp teeth and three black and orange tentacles on his head. During the song This is Halloween he is hiding in the trash can and in the center of town during the festivities that happened after the song. During the preparations for Christmas, he made hats made from dead rats and bats, Making Christmas. He lastly appears at the end of the movie when all the creatures are confused by the snow.

On Roblox, a parody hat based off of the character known as the 'Halloween Monster' was released on October 14, 2011. It is essentially the Harlequin Demon's upper head, with the eyes and tentacles. The website link would also show an advertisement to a link to Disney's main website, as well as other redirects to another one of Disney's other websites. 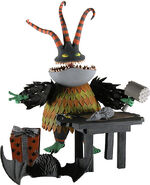 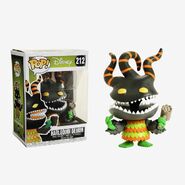 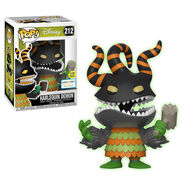 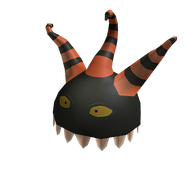