Flight
Harpies are minor antagonists in the 1997 film Hercules and in the 1997 video game of the same name.

In the film, a giant Harpy appears as one of the many enemies that Hercules needs to fight. It tries to swoop down on him and Pegasus from the sky, but it is quickly defeated and put into a cage.

In the episode "Hercules and the Apollo Mission", another pair of Harpies were used by Pain and Panic to cause Hercules to lose control of Apollo's Sun-pulling cart. These birds are shown to breathe fire fierce enough to cut the divine chains of Apollo's cart.

In the video game, they serve as a group of minor bosses that Hercules needs to fight off in the level The Big Olive. They appear sitting in the background, and once he appears, they begin flying above to abduct citizens or attack Hercules. Hercules needs to use attacks that fire up into the air in order to defeat enough of them. Harpies again appear in the level Titan Flight along with sphinxes while Hercules is flying on his Pegasus. Swarms of them try to attack Hercules, and they need to be defeated in a similar fashion to the way that they were in earlier levels. 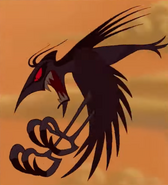 A Harpy being defeated in the Hercules film.

Harpies in the PC video game.