Tower of Terror: The Mystery

Harrison Hightower III is the main character of Tokyo DisneySea's Tower of Terror. A corrupt member of the Society of Explorers and Adventurers, Hightower collected treasures and antiquities from around the world under shady circumstances. This would eventually be his downfall when he stole a certain item: a cursed idol by the name of Shiriki Utundu.

Hightower was born in New York in 1835. When Hightower was twelve and attending Snoddington Academy in England, he bullied Cornelius Endicott II, as the two's families had been feuding for generations. This started a long and bitter rivalry between the two, with Endicott becoming his main business rival. Hightower was later expelled in disgrace, just weeks before his graduation, after a prank allegedly involving some glue and a goat got out of hand. Hightower blamed Endicott for his expulsion, with Endicott never forgiving Hightower for the unbelievable cruelty of said prank.

After inheriting his father's fortune, Hightower battled Endicott in becoming New York's most dominant figure, with Hightower using his wealth to undermine Endicott at every turn, such as making Endicott the only influential New Yorker not invited to his hotel's opening, and denying Endicott membership to the Pharaoh's Explorers Club, which Hightower controlled.

While escaping from hostile natives in the jungle of the Congo River, he and his expedition crew ran into the dreaded Mtundu. They were surprisingly friendly towards the foreigners and invited them to share food. During the meal, Hightower learned of the tribe's protective deity, Shiriki Utundu, personified in the form of an idol resting on an altar in the village. With his curiosity and greed lit afire, the businessman tried to convince the tribe's headman to sell the statuette to him. When he refused, Harrison stole it from the village and fled with his expedition. Oddly enough, the Mtundu gave no indication of wanting to chase them for their crime, even appearing to be smiling slightly...

On the afternoon of December 31, 1899, Harrison Hightower threw a press conference and a New Year's Eve party in his hotel to boast of his "latest find," showing a pompous attitude and allowing no real question. When reporter Manfred Strang from the New York Globe-Telegraph asked if Shiriki Utundu wasn't really cursed, an annoyed Hightower had him thrown out.

That night while his celebration was a success, Harrison retired early (at the stroke of midnight) to find a spot for the idol in his penthouse apartments. He was stopped at the elevator by Mr. Smelding, his personal valet, with a warning to show proper respect for the statue. A sneering Hightower refused, and defiantly extinguished his cigar on Utundu's head.

On January 1, 1900 12:00 AM midnight inside the elevator, Shiriki Utundu came to life with an evil green glow in its eyes, horrifying Mr. Hightower. The cursed idol gave out a terrible laugh as it summoned green lightning to blast Harrison into oblivion, plunging the elevator down the shaft and causing the chaos that led to the hotel's closure and its reputation as a haunted place.

13 years later, he noticed Strang and Beatrice Rose Endicott, and tried to use the telephone and warned them to get out of the hotel. Strang was surprised to hear his voice, and realized that Shiriki Utundu really was cursed.

Harrison Hightower III was created for Tokyo DisneySea's Tower of Terror in 2006 for an original story due to Japanese audiences being less familiar with The Twilight Zone, on which the American and European versions are based. Hightower was inspired by American politician and businessman William Randolph Hearst while being played by imagineer Joe Rohde. Hightower's classic depiction was that of an evil colonial thief and pillager with most Joe Rohde depictions of the character falling in said line.

In 2013, Hightower was retconned into being a member of the Society of Explorers and Adventurers with the attraction Mystic Manor in Hong Kong Disneyland. Unlike Tower of Terror, Mystic Manor had a much more cartoony tone and also used a more glamorized and romanticized depiction of colonialism, white billionaires and colonial exploration which Hightower was created to criticize. Due to this retcon, many of Hightower's subsequent appearances were used for the context of the S.E.A., often alongside other members of the society.

Harrison Hightower III is presented as a decadent and greedy heir who used his money and influence to get what he wanted -- namely, artifacts and items from cultures found around the globe. If something piqued his interest, he stopped at nothing to acquire it for his own, finding no qualms about resorting to methods such as outright plunder and exploiting the good will of the native people he encountered, keeping the stolen items stored in his inherited mansion-turned-hotel on display as trophies. Harrison was a particularly skeptical and disrespectful man who mocked the thought that Shiriki Utundu was cursed -- something that led to his eventual downfall.

Harrison Hightower is shown as an elderly man with a white beard and mustache. He wears a white vest, red and yellow checkered fez, and a dark, fur-trimmed overcoat over black boots and tan travel pants.

In the Aunty's Beach House area of Aulani is a portrait from the Adventurers Club showing Merriweather Adam Pleasure and several men on a safari. Alongside this portrait is a letter from Pamelia Perkins explaining that the portrait is of the Pillagers Brigade's 1899 expedition to the Congo where Harrison Hightower III first found Shiriki Utundu. She goes on to identify the Pillagers Brigade and Hightower himself as being ancestors of the Adventurers Club which the club acknowledges but wishes to grow away from and make amends with.

Harrison makes a minor appearance in a miniature group portrait of S.E.A. on a shelf, seemingly in the possession of Prof. R. Blauerhimmel.

In the queue for the Jungle Cruise is a crate from Hightower Industries. It is, however, unconfirmed as to whether the company was started by Harrison, his ancestors, or his successors.

Harrison Hightower III is mentioned in a letter hung up in this bar sent in 1912 from the New York City Preservation Society to Trader Sam, a character from the Jungle Cruise. The letter explains that Hightower's right-hand man was Trader Sam's grandfather Billamongawonga AKA Trader Bill whom the NYCPS sent Sam a portrait of recovered from the Hotel Hightower.

On a wall in this restaurant is an oar commemorating Hightower's expedition on the Yangtze River in 1872.

There are multiple allusions to Harrison within the RV Oceaneer Lab of Captain Mary Oceaneer. Amongst them are the 1899 S.E.A. group photo and two newspapers from New York City on the life of Harrison Hightower III. The first newspaper covers the opening of the Hotel Hightower while the second covers Hightower's disappearance within the estate.

In the queue for this attraction is an 1899 portrait of the Society of Explorers and Adventurers in the Hotel Hightower. Amongst them is Harrison Hightower III holding Shiriki Utundu.

Throughout the queue for this attraction are crates labelled "HIGHTOWER TRUST". The queue for Tower of Terror explains that Harrison Hightower III and Smelding were the explorers responsible for having desecrated the temple but that his property is being used to posthumously restore it.

On the tours of Hotel Hightower presented by the New York Preservation Society, archival recordings of a press conference tell the story of how his contact with the Shiriki Utundu statue led to the events of the hotel's haunting.

During the ride, guests see the blue ghost of Harrison Hightower reaching out to touch the idol resting on a table in a hallway, before it reanimates itself once more and zaps him into an elevator shaft, sending him crashing down.

The, "Pillagers Brigade" portrait from the Adventurers Club would be retconned into depicting Harrison Hightower III on his 1899 expedition to the Congo.

Two books in the Jungle Navigation Co. Ltd. Skipper Canteen restaurant's library are written by him, with titles including "MINE!: Treasures of the Animal Kingdom" and "Everest Expedition: Search for the Yeti". These books are references to Disney's Animal Kingdom theme-park which was largely developed by Joe Rohde, Hightower's actor. Hightower is also used as the namesake for the "Hightower Spirit of Adventure Award" given to Dr. Albert Falls.

Tower of Terror: The Mystery

Hightower appears posthumously in this short.

Shinji Takahashi and the Mark of the Coatl

In Shinji Takahashi and the Mark of the Coatl, Harrison Hightower III's legacy of seizing artifacts for his own gain is continued into the 21st century by the Hightower Corporation, which kidnaps the title character in an effort to exploit his sudden connection to a powerful ancient guardian spirit.

Hightower and Smelding in Egypt 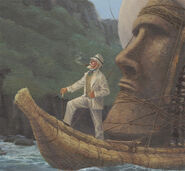 Hightower in the Foyer of the Atlantis Ballroom, 1898

Mural of Hightower overseeing the unloading of his treasure. 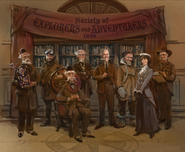