The Great Big Book of Everything, singing its theme song with Elsie

Baths, check-ups (formerly, as shown in "X-Ray X-tra!"), when Stanley's eyes are "broken" (actually, he had no idea normal chameleon eyes functioned that way)

He is an obese brown bulldog who associates with fellow pet Elsie, with whom he sings the theme for the Great Big Book of Everything in every episode. He often refers to the others as "dude" and sometimes acts slightly dim-witted. An example is when Harry realizes how well he gets along with Elsie, her being a cat, he surprisingly states that he thought she was a Chihuahua. 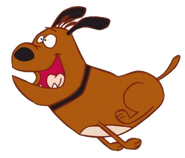