Hyperspace storage
Harry Handbag is a Toon bag in the TV series Bonkers. He appears in the episode "In the Bag" and is voiced by Frank Welker. Harry was feeling rather alone and without any company. He figured that he wouldn't be so lonesome if he stored people and objects inside of him. 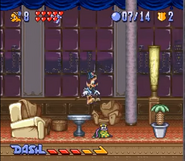