Joan Gelms
Harry Reeves was an American animator and screenwriter, who worked in Disney Studios for three decades.

Born to William Reeves, a meat salesman, and Nettie Epperson in 1906, Reeves hitchhiked from his home for a short trip to southern California, where he fell in love with show business. After graduating from Wiley High School, he concentrated on honing his artistic skills at John Herron Art Institute in Indianapolis for a few years before moving on to the National Academy of Design and Columbia University in New York.

While serving as a barker at a Broadway theater in 1929, he met three animators from Pat Sullivan Cartoon Studios, producer of Felix the Cat shorts and soon got a job with them. He met and worked under pioneer film animator Otto Messmer, creator of Felix. The studio was reluctant to make cartoons with voices, so Reeves left in November of 1930 for Disney Studios. He earned $60 a week as an "apprentice cartoon animator" and worked on the Silly Symphonies with Ben Sharpsteen and David Hand. In 1934, he became an "animator and apprentice story writer" and finally, in July 1937, he became a story director for three Donald Duck shorts: Good Scouts (1938), Donald's Lucky Day (1939), and The Autograph Hound (1939). He also worked on shorts for Mickey Mouse and Pluto. During World War II, he teamed up with Homer Brightman to help conceive Saludos Amigos, The Three Caballeros, First Aiders, Make Mine Music, Canine Casanova, and Canine Patrol.

Later in life, Reeves then amassed a large fortune as a real estate developer. On his 65th birthday, February 9, 1971, a home he was building in Selmar was destroyed in the San Fernando earthquake. Though his family didn't yet reside in the home, he had established a studio of his Disney art and other memorabilia there. While sorting through the rubble to salvage his collection four days later, he suffered a fatal heart attack.

He was survived by his wife and daughter, who attended Saint Mary-of-the-Woods College; his brother Roy, a printer with the Terre Haute Tribune-Star for many years; his sister-in-law Edith (Bogard) Reeves; and his nephew Ron, former vice president for development and external affairs at Rose-Hulman Institute of Technology. 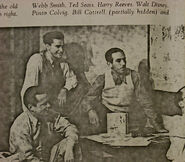 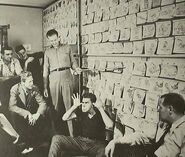 Reeves clowning around while Carl Barks leads a storyboard