For Disney, he voiced the Dog Announcer in the 2005 Disney animated feature film, Chicken Little and reprised the role again in the video game of the same name. He also played Guido Finucci in the 1991 Touchstone Pictures film, Oscar. He even made a guest apprence in the television special Walt Disney World's 15th Anniversary Celebration as himself.

J. Audubon Woodlore
(Down and Out with Donald Duck) 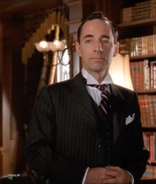 Guido Finucci
(Oscar)
Add a photo to this gallery

Harry Shearer and his wife, Judith Owen at premiere of Chicken Little in October 2005.

Harry Shearer attending the 2019 Tribeca Film Fest.
Add a photo to this gallery

Retrieved from "https://disney.fandom.com/wiki/Harry_Shearer?oldid=4355715"
Community content is available under CC-BY-SA unless otherwise noted.