Getting forced to marry the prince, danger, being a cat, being kidnapped, Muta insulting her

Able to speak to cats

Returning to the human world with confidence in herself

"Wow, you have great taste, Baron."
Haru is the protagonist of Studio Ghibli's The Cat Returns. She is a quiet, shy, unassuming teenaged girl who saves Prince Lune from getting hit by a truck. She was voiced by Anne Hathaway (and Katia Coe as a little girl) in the Disney Dub.

At first she appeared to be shy, quiet, and unassumed.

Haru has fair skin but it appears lightly tan when in cat form. She wears her short, brown hair in a large messy ponytail, and has brown eyes. She wears a school uniform.

Haru just turned into a cat 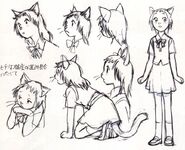 Retrieved from "https://disney.fandom.com/wiki/Haru?oldid=4287548"
Community content is available under CC-BY-SA unless otherwise noted.