Disney Wiki
Register
Don't have an account?
Sign In
Advertisement
in: Characters, Kids, Miles from Tomorrowland characters,
and 9 more

Sly (Robo-dog)
Haruna Kitumba is a character who appears in the Disney Junior animated series, Miles from Tomorrowland and one of the major characters in the third season. He is a friend of Miles Callisto and used to be his neighbors with him before Miles and his family went into outer space. Later in the series, he becomes a member of Mission Force One.

When Miles was still living on Earth, Haruna was his next-door neighbor and they were the best of friends. They use to hang out together and go skateboarding. Even when Miles and his family left to explore the universe, the two boys remained good friends and stayed in contact but at the same time, they missed hanging out with each other.

In his debut appearance, "To the Goldilocks Zone", Haruna and his family were moving into outer space to start a human colony on a planet called Malvowlio. Sadly, his new home was destroyed by a Protoplanet which collided into Malvowlio before Haruna and his family could arrive. However, with help from their old neighbors, the Callistos, they were able to find another planet that was suitable for human life. 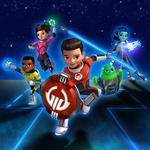