Disney Wiki
Register
Don't have an account?
Sign In
Advertisement
in: Article of the week, Locations, The Haunted Mansion,
and 6 more
English

The Haunted Mansion is a white antebellum manor located on Esplanade Street in the city of New Orleans, where it overlooks the Mississippi River. The mansion has three-stories in-addition to a cupola at the top of the manor. Behind the mansion is an expansive cemetery, and throughout the grounds are large trees and plant-life.

The early years of the mansion are shrouded in mystery, though it was likely constructed in the latter half of the 18th century or early half of the 19th. According to some stories, the mansion's original owner was a sea captain who lived in the manor with his bride. While the circumstances of these two change on the telling if they ever were true residents at all, the stories always end with the two dying and becoming ghosts in the estate.

At some point, the mansion came into the ownership of a wealthy family (likely known as the Gracey family) who had at least 13 members. The family's patriarch was one, "Grandpa Marc" who died and was buried in the family plot. It is believed (though disputed) that the master of the house was one Master Gracey, a handsome aristocrat in the family who harbored a dark-side. All the members of this family would face sudden and violent deaths, leading to them being buried in the family-plot outside the manor.

A variety of different characters had mysterious connections to the Haunted Mansion's history throughout the 19th century. Most notable amongst these was a Romani clairvoyant named Madame Leota who took her vardo to the estate. Leota's ghost haunted a séance chamber in the mansion, where her spirit incarnated within a crystal ball. A figure related to the madame was one Little Leota, a presumed relative (most frequently identified as her daughter) whom posthumously became the mansion's, "Ghostess". Little Leota's male counterpart was a deformed murderer known as the Hatchet Man who would commit suicide in the manor's cupola and subsequently become the mansions, "Ghost Host".

At some point in time, these spirits would work to run the Haunted Mansion as a sort of retirement home for spirits. Guests of the manor were brought in from all over the world via the Ghost Relations Department. Notable agents for the manor came in the form of Ezra, Gus and Phineas AKA The Hitchhiking Ghosts, three spirits who haunted mortals until they returned to the manor to become residents. Madame Leota herself would work to materialize the spirits who came within the mansion's happy haunting grounds.

By the year 1877, the manor came under the ownership of one George Hightower, a wealthy man from Newport Beach, California. Between 1875 and 1877, George moved into the manor with his bride-to-be Constance Hatchaway, a woman from Money County, California. Unknown to George, Constance was a serial-killer who targeted wealthy men to kill with an axe and keep the severed heads of within hatboxes as trophies. Constance's activity was accompanied by a mysterious man who maintained some possession over the heads of Constance's victims.

Constance would stash away the mementos of her life of crime in the Haunted Mansion's attic, seemingly resulting in the attic being haunted by her four late-husband (if not others). Following her marriage to George, Constance murdered the aristocrat with an axe to the skull and inherited his estate. The hatbox man would also die via decapitation with his own head being stuffed within a hatbox (Constance's modus operandi) and him going on to become the "Hatbox Ghost" who haunted the mansion.

Constance herself lived comfortably into her old age and evaded the law. The Black Widow Bride ultimately died of unknown circumstances in 1927 at the age of 76. Constance's murderous spirit would inhabit the attic of the manor. The mansion would garner a reputation amongst locals as being haunted and as hosting hundreds of spirits within. Around the holiday seasons, the manor would host Jack Skellington and his residents of the realm Halloween Town who assisted the undead residents in celebrating the holiday seasons.

By 1935, the mansion came into the ownership of the Johnson family. The Johnsons were frequently terrorized by the many spirits within the manor. During the holiday seasons, the Johnsons were also terrorized by Jack Skellington and his pet ghost-dog, Zero. Around September 22, 1936, the Johnson family abandoned the mansion and reported on its haunting to the First International News, history's first internationally printed newspaper. The manor was later resold for a fraction of its original price due to the supernatural aura and stories surrounding the manor.

Following this event in the 20th-21st century, the Haunted Mansion came to hold 999 happy haunts from all over the world. Manor officials such as the Ghost Host would work to try and increase the numbers as much as possible, as the manor always has room for a thousand. The manor's exterior would be taken care of by one Silas Crump, the estate's caretaker, who was often accompanies by his pet dog. At some point, the manor became a sort of connection between Earth and "The Spirit World", the domain of spirits which did not oblige the laws of the mortal world.

An article from a 1936 issue of the "First International News" newspaper details how the Johnson family encountered ghosts in the manor. This same newspaper mentions League of Adventurers member Cooter Carter engineering a safe rope transport system through Mount Hua.[1]

In Disneyland's Club 33 is a booth decorated with a portrait of the mansion.

The Haunted Mansion's setting is this manor in the Disneyland version of the attraction.

The manor is passed by on Disneyland's Rivers of America, following the "Down in New Orleans" scene while passing New Orleans Square. The captain of the riverboat makes comments about the urban-legends surrounding the Haunted Mansion and how it is reportedly inhabited by 999 spirits.

The manor is reimagined as the setting for this film, where it is located in the New Orleans bayou and officially referred to as Gracey Manor.

In this special, Gonzo is challenged to spend Halloween night in the Haunted Mansion.

There were several appearances of and references to the Haunted Mansion in this show. The most consistent was a crate in the basement of the House of Mouse containing many of the ghosts from the mansion. It appeared in the episode "Pete's House of Villains" during an ad for, "The 7 Deadly Sinners" where the hitchhiking ghosts stood outside the mansion as ticket-scalpers. Many features of the mansion were included in the episode "House Ghosts" featuring the Hitchhiking Ghosts, the Lonesome Ghosts, the Hatbox Ghost, the Skeletons from The Skeleton Dance(1929), the Executioner, and the Bride when Pete lets them lose on the club by trying to frighten everyone away. However, his plan failed miserably and they scared him away instead.

The Haunted Mansion was the setting for Disney Kingdoms: The Haunted Mansion. Here, only four of the ghosts within the mansion actually died there: Madame Leota, Captain Gore, Constance Hatchaway, and the Hatbox Ghost. The Ghost Host's corpse appears, however he is never shown to be undead. The mansion is also revealed to have an endless staircase connecting to supernatural locations across the globe including Ravenswood Manor, the Hollywood Tower Hotel, the Museum of the Weird, the Magic Kingdom's Haunted Mansion and Rainbow Ridge.

The Legend of Gracey Manor

This story was created as a backstory for the 2003 film's Haunted Mansion.

The mansion's interior is the setting for the Haunted Mansion levels in this game.

The Haunted Mansion is the setting for all three Haunted Mansion mini-games in this video-game. The story has players stuck within the mansion after disrupting one of Madame Leota's spells. Following this, players have to fight Madame Leota, the knight and Constance Hatchaway to escape. Behind the mansion, guests can find the singing busts and conduct them. 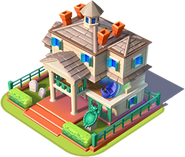