Clock Cleaners
Hawaiian Holiday is a Mickey Mouse cartoon short that was released in 1937. It is notably one of only four theatrical shorts in which all five members of the Fabulous Five (the collective group name for Mickey, Minnie, Donald, Goofy and Pluto) appear together, the others being On Ice, The Standard Parade, and Pluto's Christmas Tree (if Minnie, Donald, and Goofy's cameo near the end is counted).

The cartoon stars an ensemble cast of Mickey Mouse, Minnie Mouse, Pluto, Donald Duck, and Goofy while vacationing in Hawaii (then an organized incorporated territory of the United States).

Mickey and Minnie play the ukulele and dance for a few brief moments - then it's on to the main body of the short as Goofy surfs, Pluto fights with a crab, and Donald sets himself on fire.

Mickey plays his ukulele and Minnie does hula

Donald does the hula.

...only to lose his surfboard. 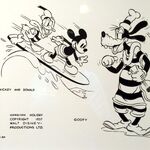 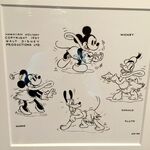 In Japan, Hawaiian Holiday was paired with Bongo and a re-release of Alice In Wonderland, circa 1973

A second Japanese promo from 1973