"Healing Incantation" is a song sung by Rapunzel throughout the film to activate her powers of reversing damages, including complete regeneration of damaged tissues and organs as well as an aging reversal to a certain degree. Mother Gothel learned the incantation from Zhan Tiri and later taught it to Rapunzel.

The song is first heard at the beginning of the movie when Mother Gothel witnesses the magical sundrop blossom into a unique, golden flower. She sings the song, which causes the flower to glow majestically, releasing millions of magical specks, soon transforming the old, wretched Mother Gothel into a beautiful, young lady. This process lasts for centuries before it ends abruptly. Hearing the palace guards approaching, she attempts to conceal her personal secret, but knocks the hiding prop with her lantern, allowing the guards to dig up the flower from its roots and use it for the queen, who was ill from having a baby. When the queen ingested the flower, she passed its powers onto her baby: Rapunzel. The power made its way into Rapunzel's hair, each strand resembling a petal. Later that night, Mother Gothel kidnapped Rapunzel, using the power for herself, and concealing the innocent child from the "dangerous" outside world. Since Gothel began feeling "run-down", she taught Rapunzel the incantation.

Almost eighteen years later, Rapunzel and Eugene are confined after the dam collapses, releasing tons of water into a canyon. When trapped in an unfinished mine—which was rapidly filling with water—Eugene injures his hand from scrabbling on a rock in an attempt to find a way out. After the two confess to each other (Eugene revealing his real name and Rapunzel revealing her powers), Rapunzel realizes she can use her hair to illuminate the deep, dark depths of the cave. Rapunzel briefly sang the first two lines of the incantation—just enough to let her power shine, revealing loose rocks. When they reach the banks of a river, Eugene questions Pascal about the hair hysterically, to which Rapunzel responds "It doesn't just glow." That night, Rapunzel performs her incantation on Eugene's injured hand, healing it, and making Eugene babble maniacally. The incantation makes its final appearance when Rapunzel tries to convince Eugene to let her heal his stabbing injury from Mother Gothel but is astonished when Eugene cuts off nearly all of Rapunzel's 70ft long hair. This turns her hair brown, revealing Mother Gothel's true form, before Pascal trips Gothel out of the window, turning her to dust. Eugene dies from his injuries, while Rapunzel sings the song softly, unknowingly releasing the power in her tears. A tear drips down onto Eugene's cheek, blossoming an astounding healing scene before Eugene is revived and kisses Rapunzel passionately.

Flower, gleam and glow
Let your power shine
Make the clock reverse
Bring back what once was mine 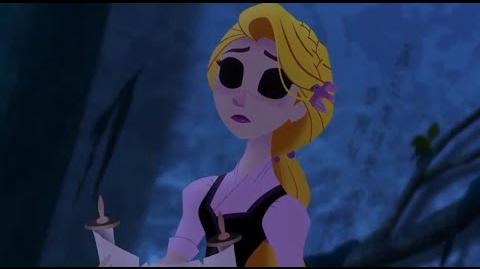