Disney Wiki
Register
Don't have an account?
Sign In
Advertisement
in: Objects, Snow White and the Seven Dwarfs, The 7D objects,
and 4 more

The 7D
Once Upon a Time
Descendants: Wicked World
Sofia the First
Tangled: The Series (cameo)

The Evil Queen, the Huntsman

“But to make doubly sure you do not fail, bring back her heart in this.”
―The Evil Queen presenting the box to the Huntsman

The Heart Box is a small red jeweled box that appeared in the film Snow White and the Seven Dwarfs. It belonged to the Evil Queen, who gives it to the Huntsman to put Snow White's heart in after he kills her. But the Hunstman cannot go through with this evil task so he instead spares her life and urges the kind princess to flee into the forest to escape the Queen's wrath and eventually reaching to a small cozy cottage owned by the Seven Dwarfs. The Huntsman then puts the heart of a pig inside the box instead to fool the Queen. When she finds out from the Magic Mirror that she is holding the wrong heart, she is furious at being tricked and storms into her secret laboratory among the dungeons inside her Castle, and tosses the box to the floor.

The Heart Box is a small painted red hope chest with the golden latch resembling a conventional heart symbol with a gold dagger embedded with green jewels on it piercing through the heart.

Promotional image of the Heart Box.

The box along with other Villain objects in Sofia the First

Heart Box in The 7D 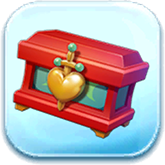