John
Heather Headley is a Trinidadian-American R&B and soul singer, songwriter, record producer, and actress who has won one Tony Award and one Grammy Award.

In 1997, she originated the role of Nala in The Lion King, the Broadway musical. Headley's performance was well received, and she then originated the title role in the Broadway adaptation of Aida, earning the Tony Award for Best Actress in 2000. She sang in a duet with fellow R&B singer Kenny Lattimore in the end title version of "Love Will Find a Way" from The Lion King II: Simba's Pride. 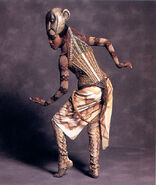 Fikiri
(The Lion Guard)
Add a photo to this gallery
Retrieved from "https://disney.fandom.com/wiki/Heather_Headley?oldid=4146477"
Community content is available under CC-BY-SA unless otherwise noted.