1
Heather Deen Locklear is an American actress. She is perhaps best known for her role as Amanda Woodward on the FOX sitcom Melrose Place. She also played Jean Hamilton in the 2005 comedy The Perfect Man.

Her Disney roles include a guest appearance on Muppets Tonight in episode 203, Nymphs in Hercules, and Heather Truscott in Hannah Montana: One in a Million. She was also mentioned in Guardians of the Galaxy Vol. 2. 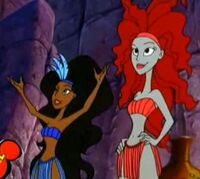 Nymphs
(Hercules)
Add a photo to this gallery

Heather Locklear attending the TNT's 25th Anniversary Party in July 2013.
Add a photo to this gallery
Retrieved from "https://disney.fandom.com/wiki/Heather_Locklear?oldid=3785838"
Community content is available under CC-BY-SA unless otherwise noted.