"Heavy Mental" is the forty-eighth episode of Darkwing Duck, and the 37th episode to air on The Disney Afternoon.

Darkwing and Launchpad deliver a package to S.H.U.S.H. Headquarters in the Swiss Alps. J. Gander takes them to the laboratory to show them their latest research. They meet Dr. Sarah Bellum and find out that SHUSH has been working on something called the Norma Ray. The Norma Ray is used to give someone incredible psychic powers and Launchpad volunteers to undergo the test. Meanwhile, F.O.W.L. has Major Synapseworking on the very same project with no results to show for it. He hooks up his two volunteers to a machine and starts to get a large reading, but it is coming from somewhere else. Dr. Bellum has Launchpad perform some test to see if the ray worked and he fails them all but causes mayhem outside which no one sees. Launchpad and Drake make it back home and discover that Launchpad actually did get psychic powers. The Muddlefoots show up and invite them over for a cookout. Launchpad's new psychic powers create mayhem there as well, but the Muddlefoots are oblivious to it. Drake makes an excuse for he and Launchpad to leave and they go to get the Thunderquack to take Launchpad to S.H.U.S.H. Launchpad mentions that someone is stealing the Norma Ray and his head expands. Meanwhile back at the S.H.U.S.H. lab, Dr. Bellum is testing the ray on a lizard. She tells it not to think, but it accidentally does and explodes. Major Synapse shows up and volunteers his two underlings and Dr. Bellum unwittingly tells them that they must not think or their heads will explode. Major Synapse mentions F.O.W.L. and Dr. Bellum tries to stop him, but it is too late. Darkwing and Launchpad get to the lab and Darkwing goes up to ambushed them. Darkwing is the one who gets ambushed, however, since Hotshot and Flygirlnow have psychic powers. Launchpad stops them, but goof up and causes a building to land on he and Darkwing. Major Synapse orders Hotshot and Flygirl to bring the Norma Ray and Darkwing to the hideout. Launchpad comes to and blows up the building that was on top of him. He causes some items to levitate around his head, including a comb, wallet, chocolate candy bar, and causes the exploded lizard to reappear. He gets back to the Darkwing hideout and tells Gosalyn what happened. Gosalyn notices the wallet and sees that it is the Major's and they go to the address on the drivers license. F.O.W.L. orders Major Synapse to eliminate Darkwing. Flygirl uses her power to raise a giant anvil to smash Darkwing. Launchpad and Gosalyn make it there just in time to get ambushed by Hotshot. Gosalyn falls onto the anvil as Launchpad and Hotshot battle. Launchpad uses his power to levitate Hotshot and goes down to help Gosalyn. He takes his mind off of Hotshot and Hotshot falls down and crashes into Launchpad and they then fall onto the anvil causing Flygirl to lose control of it. She causes the anvil to crash into the wall and knocks everyone off. Gosalyn pushes Darkwing off the target platform (he is in a block of ice) to free him and he crashes into Launchpad. They fly up and almost hit the anvil and fall down again breaking Darkwing out of the block of ice. Flygirl now drops the anvil on them, but Launchpad is able to stop it and causes it to land on Flygirl and Hotshot. Launchpad wants to return to normal and they go to get the Norma Ray. Major Synapse gets the ray and turns it on himself. He turns into a giant floating brain. Darkwing tries to use nerve gas on him but gets zapped. Launchpad then tries to use his powers and gets zapped as well. Major Synapse tells them that he cannot be defeated and that he is pure thought. This gives Darkwing an idea. He uses the Norma Ray on the Major and starts asking him questions. This causes the Major to think and he explodes. Darkwing and Gosalyn get out from under the rubble and look for Launchpad. They find him and Launchpad has returned to normal. 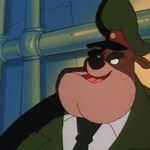 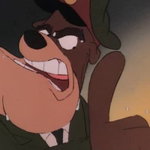 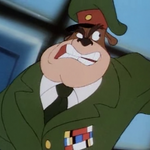 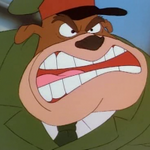 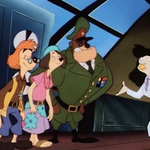 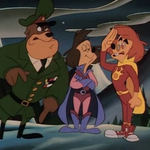 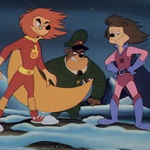 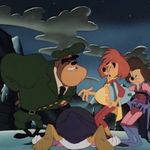 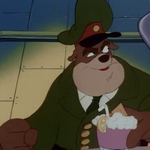 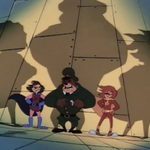 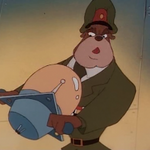 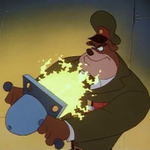 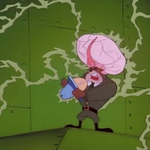 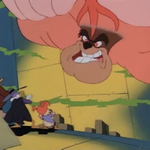 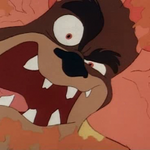 Retrieved from "https://disney.fandom.com/wiki/Heavy_Mental?oldid=4067582"
Community content is available under CC-BY-SA unless otherwise noted.