Goddess of the Underworld (formerly)

Demigoddess of Witchcraft
Queen of the Night

Witchcraft
Black magic
Immortality
Hecate is the Olympian demigoddess of witchcraft and the night. She  appeared in the Hercules: The Animated Series episodes "Hercules and the Underworld Takeover" and "Hercules and the Disappearing Heroes" as the main antagonist.

Hecate is an embittered demigoddess who has always wanted to prove her skills to everyone. Since she always comes second best to Hades, she has developed a sinister, bitter jealousy and personal hatred of Hades, and tries to steal the Underworld throne from him. Like Hades, she has little sway among other Olympians and is frequently ignored in her efforts to "improve" the Underworld, and was annoyed when he presented her with a "Thanks for the blind obedience" statuette for years of work. Hecate thinks very highly of herself and her skills, but lacks foresight and is quickly put in her place by Hades.

Hecate has no qualms about cheating or deceiving others to get what she wants, and her schemes tend to revolve around stealing others' powers away. She has no interest in taking over Olympus, but wants to make the Underworld the best it can be by collecting the souls of everyone on Earth; how this would be done is unexplained. She seems to hold a higher opinion of her minions than Hades, and pets them for a job well done.

Hecate has dark indigo hair with a lighter blue streak in it, pink skin, and wears a blue headdress. She wears a blue dress, cape, and armbands on both wrists.

As one of the Olympian gods, Hecate possesses all the powers standard to them, such as omnipresence, vast strength, and shape shifting. She displays expertise in stealing others' powers away, using a crystal to contain and drain Hades' flame and a monster to inherit heroes' prominent traits.

As the Demigoddess of Witchcraft, she has vast knowledge of spells and rituals. In actual mythology, because Hecate was the Goddess of Magic, she is the greatest sorcerer of all the Olympians, second only to Zeus. Her godly expertise in sorcery has spanned even before humanity's existence.

She is also capable of pulling off any magical feat that has been displayed by other Olympians that expertise in other areas.

"Hercules and the Underworld Takeover"

After continuous failed attempts to prove she would be a far better Goddess of the Underworld than Hades, Hecate decides to steal his Godhood by taking his flame through trapping a sample in a magic crystal.

While he is busy with the Council of the Gods, she succeeds in taking over the Underworld and taking control of Hades' allies, declaring her intention to collect all the souls on Earth. Fortunately, Pain and Panic escape and seek help from Hercules in overthrowing her.

When confronted by Hercules, Hecate transforms her crystal into a humanoid shape. At that moment, Hades returns, with his powers almost depleted and his personality having become mellow. As Hecate started to gloat about her new Underworld order, Hercules destroys the crystal monster, restoring Hades' rightful power.

As Hercules quickly excused himself, Hades exacts fiery punishment on Hecate for plotting to usurp his throne and happily returns to his usual title.

Hercules and the Disappearing Heroes

Hecate returns to take over the Underworld again, but this time, she kidnaps all the famous heroes from Greece and steals their great abilities in order to create a powerful monster to dethrone Hades. In the end, she is defeated yet again, and gives her statuette reward to the heroes to use as bowling practice. 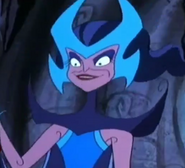