Adira (currently), keeping people away from the Dark Kingdom

Adira (formerly), anyone who enters the Dark Kingdom

“...But none of the brothers are as dangerous or sadistic as Hector. And this is his domain, the Great Tree. He swore to stay here to ensure no one crosses these mountains.”
―Adira, describing Hector[src]

Hector is an antagonist in Rapunzel's Tangled Adventure, who first appears in the special "Rapunzel and the Great Tree". He is a villainous warrior and the most dangerous and sadistic member of the Brotherhood, sworn to keep all away from The Dark Kingdom.

25 years ago, Hector served King Edmund alongside Quirin and Adira. When the king failed to destroy the Moonstone, Hector took an oath to uphold the king's last wish to keep anyone from finding the Dark Kingdom to prevent the Moonstone from falling into the wrong hands. However, Adira insists on finding the Sun Drop, which Hector rebuked, believing it's just a myth. He allowed her to go try finding the Sun Drop but warned her that if she ever returned, she'll be deemed a traitor and he'll end her life. Sometime afterward, he went to the Great Tree and lived there in order to make sure no one gets pass the mountain on their way to the Dark Kingdom.

According to Adira, Hector is very dangerous and sadistic, even more so than the rest of the Brotherhood. He's also very determined to complete his goals, especially when he's willing to risk the danger of the Great Tree's power in order to use the spear against Rapunzel and her friends. However, he does have a bit of conscious and caring side, as he apologizes to Adira when he knocked her out during a battle to protect Rapunzel and was aware of the possible consequences of taking Demanitus' spear out of the Heart of Zhan Tiri's tree. Hector is also very loyal to King Edmund, determined to uphold his last wish and his loyalty towards the King helps to motive his actions.

In this debut appearance in "Rapunzel and the Great Tree", he criticized Adira for suggesting the search of the Sun Drop, which he believes was just a myth. He swore that if Adira comes back, with or without the Sun Drop, he'll end her life.

25 years later, he spotted Rapunzel and her team and chased after them on the back of his rhinoceros. When Adira arrived to save them, he recognized her and fought with her. Fortunately, Rapunzel got her friends away from him by having their caravan fell off the cliff, making Hector think they fell with it. Hector went down the canyon to make sure and when he saw that there's no one inside, he pushes the caravan into the river and ran back to the Great Tree, knowing they'll be there.

When he found them inside the tree, he grabbed hold of Cassandra before getting challenged into a fight by Adira. During the battle, he accused her of being a traitor for going against the king's wish of keeping anyone away from the Dark Kingdom. Adira talked back, saying that the Brotherhood were spending their lives hiding something no one was even looking for. Soon, Adira knocked Hector down, telling him that she'd seen the Sun Drop's power firsthand and he would too if he'd help them. However, Hector turned the tables on her and knocked her out. He quietly apologizes to her before turning to kill Rapunzel. Cassandra challenged him to another battle, which he agrees with a grin and he easily overpowered her. When he leaned down and asked her what she's waiting for, she threw some dirt on his face, temporary blinding him, and pushed him off the deep ledge.

However, he survived the fall and spotted Demanitus' spear, sticking into the Heart of Zhan Tiri's tree. Despite knowing that, Hector saying to Lord Demanitus to forgive himself "for unleashing the evil that sleeps within", he took the spear out, intending to use it, but soon a great evil have been unleashed, and he had become possessed by the tree's power. Controlled by the tree, he attacked Rapunzel and her friends and nearly succeeded. However, Rapunzel used the Moonstone's incantation to destroy the tree and the plants holding Hector and her friends. With the tree weaken and collapsing, Hector gained enough senses to tell Rapunzel that Adira's lying to her, warning if she goes to the Dark Kingdom, she'll be doomed. The plants let go of him, sending him falling down the deep ledge again. Adira jumped down and managed to save him and herself from the fall. Weakened, but alive, Hector was carried away by his pets with Adira following him.

After a long absence, Hector returns at the end of "Race to the Spire", having his mind controlled by Cassandra after she got access to the Mind Trap she and Zhan Tiri stole at the Spire .

He reappears, along with Adira, in the episode "Once a Handmaiden... " still under the control of the Mind Trap and helping Cassandra take over Corona against his will, dueling against King Edmund in the process before the latter retreats with Rapunzel and her friends and the kingdom's people. In "Plus Est En Vous", He and Adira in Cassandra's Stronghold. later the Mind Trap was destroy Hector, Adira and King Edmund are freed from control late Hector joins with the citizens of Corona as they all face against Zhan Tiri save to Corona. At the end Hector along with Adira and King Edmund are return to the Dark Kingdom. 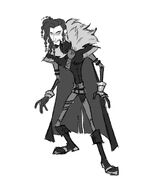 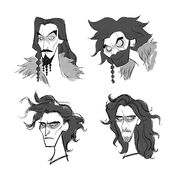 Adira and Hector are freed from the control of the Mind Trap.