Disney Wiki
Register
Don't have an account?
Sign In
Advertisement
in: Characters, Alice in Wonderland characters, Disney characters,
and 8 more

Getting hit by the flamingo's head
The Hedgehogs are the animals who appeared in the 1951 Disney film, Alice in Wonderland. They're used as croquet balls by the Queen of Hearts.

Two Hedgehogs appeared in the croquet sequence from the film. The Queen of Hearts used a green hedgehog and it went rolling underneath the cards successfully. One of the cards runs after the green hedgehog to get under it in the next shot, but misses and the Queen of Hearts sent him away with his head decapitated. However, Alice is having a hard time to hit the pink hedgehog with the pink flamingo because it tickled her by kicking her in the stomach, embarrasses her and uses her as a croquet mallet. Luckily, Alice beckons to the flamingo and grabbed it by the neck and was able to make her shot, but as the Queen of Hearts watched, the pink hedgehogs missed a few cards so fast that it ran into a tree and a rose comes off it.

The orange hedgehog was seen in the House of Mouse episode "Thanks to Minnie". In that episode, Goofy told the flamingo about Clarabelle's secret about Minnie, then it passes it on to the Queen of Hearts who hit the hedgehog so it can pass it on to Pocahontas. 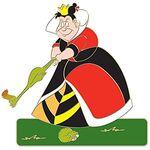 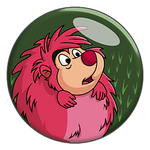 As the "Croquet Ball" badge in Disney Heroes: Battle Mode