The Simpsons: The Good, the Bart, and the Loki

The Avengers: Earth's Mightiest Heroes
Avengers Assemble
Hulk and the Agents of S.M.A.S.H.
Guardians of the Galaxy
What If...?

Gatekeeper
The Watcher of Worlds
The Protector

Guardian of the Bifrost bridge

Heimdall is the all-seeing and all-knowing Asgardian warrior-god and the guardian of the rainbow bridge, the Bifrost, watching for any attacks on Asgard.

This version of the mythological Heimdall was created by Stan Lee, Jack Kirby, and Larry Lieber.

Like all Asgardians, he possesses superhuman physical attributes, such as strength, reflexes, stamina, speed, agility, durability. However, he is generally stronger and more durable than all but a few Asgardians, such as Odin and Thor. He's an extremely skillful swordsman, wielding an enchanted uru sword in battle.

Heimdall possesses extraordinarily acute superhuman senses, most notably his vision and hearing, bordering on the extrasensory. His senses are said to be so acute that he could hear sap running through trees, and "the tiniest plant growing in the heart of the hidden hills", and see and hear anything occurring in Asgard or on Earth. Heimdall can also "look across time, as well as space". Heimdall has been said to be capable of detecting the fluttering of a butterfly's wings "a thousand worlds away". His sensorial powers can be deceived, as Loki proved.

Heimdall is an Asgardian blessed with sensory capabilities far beyond those of other Asgardians, and these senses have been put to use placing Heimdall in the role of gatekeeper to Asgard at his observatory on the Bifrost Bridge. Despite his phenomenal ability however, Heimdall was unable to perceive an intrusion by several jotuns when they stole into the vaults of Odin. This same intrusion also sparked the ire of Odin's son Thor, who came to Heimdall, with several of his friends, seeking access to Jotunheim. Although Heimdall agreed to let them pass and accepted their request that he keep their movements secret, his loyalty to Odin was stronger and he immediately reported their departure. Odin's reaction was swift and had Heimdall open the Bifrost twice more in quick succession to allow Odin to retrieve his people.

Later, with Thor banished and Odin fallen into his Odinsleep, Loki placed himself on the throne as regent and demanded Heimdall’s loyalty. Although he grudgingly accepted, Heimdall opted to only observe a literal interpretation of his vow to Loki and did not interfere when Sif and the Warriors Three used the Bifrost to reach Thor. Enraged, Loki dismissed Heimdall as a subject, thus releasing the protector of the Bifrost from his vow. Heimdall responded with an immediate attack, but Loki simply froze him in a block of ice before the blow could strike.

Heimdall was still frozen when Loki brought several jotuns through the Bifrost. Locked in his icy prison, he was helpless to prevent Loki leading one of them into the city, but he was soon galvanised by the calls of Thor who was still trapped on Earth. Smashing free, he quickly cut down two jotuns who had been left to guard, and opened the Bifrost for Thor and his friends. Severely weakened, Heimdall could assist the adventurers no further and had to be carried from his observatory.

He returned following the destruction of the observatory and when Thor asked if passage to Earth was lost, he shows him the Bifrost regenerating and replied, "No. There is still hope." When Thor asked Heimdall if he could see Jane Foster, Heimdall chuckled and told him that she still looks for him.

“We face an enemy known only to a few...
Known only to ONE.
”
―Heimdall and Thor Odinson[src]

Tired of the celebration, Thor decided to go and talk with Heimdall. The two of them talked about Jane. During the conversation, Heimdall was unable to see Jane, Thor then decided to go to Earth to investigate. While he watching the horizon, Heimdall noticed the presence of a foreign ship that turned out to be a ship belonging to the Dark Elves, he tried to stop them but he failed in his attempt. During the attack of Dark Elves, Heimdall used the Hofund to activate a shield; however, Algrim destroyed the generator leaving Asgard without defense.

After the death of the Queen of Asgard, Thor devised a plan to prevent another attack, which Heimdall helps. Heimdallr summoned Odin to report a treason, Odin asked who betrayed him and Heimdall responds that he. When Odin learned that the Einherjar guards missed the mortal woman, he looked disappointedly at Heimdall.

Thor was affected by Scarlet Witch's powers which caused him to have a strange vision. In this vision, Heimdall blamed Thor for the imminent destruction of Asgard.

Heimdall has a supporting role in the movie and is there when Thor destroys Asgard.

In the post credit scene, he meets Jane Foster again, who died of cancer, and thanking her for watching over his son, Axl, as he welcomes Jane to Valhalla. 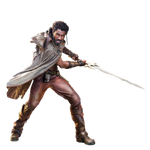 Heimdall in Guardians of the Galaxy.