Ruler of Niffleheim
Queen of Asgard

Hela is a supervillain from Marvel Comics. Commonly an adversary of Thor, she is the Norse Goddess of Death, and ruler of the Norse underworld Hel. In the Marvel Cinematic Universe, she is Hela Odinsdottir, Odin's firstborn, the older sister of Thor and adoptive older sister of Loki. She appears as the main antagonist of the film Thor: Ragnarok.

This version of the mythological Hela was created by Stan Lee and Jack Kirby.

In the Marvel Cinematic Universe, Hela Odinsdottir is Odin's first child, and Thor and Loki's older sister. The original wielder of Mjolnir, Hela served as her father's Executioner and as the leader of the Einherjar, Asgard's main army. During her time as part of the Einherjar, Hela helped Odin conquer and subjugate the Nine Realms. However, when Odin realized that peace was the true path to holding the Nine Realms together, he began to see Hela for what she truly was: power-hungry, overly ambitious and above all else, dangerous. This proved true when Hela tried to usurp Odin, and after a fierce battle where Odin defeated her, he spared Hela's life and banished her to Hel, the Asgardian Underworld. There she remained imprisoned, kept locked in that realm by Odin's very life-force. Though she would attempt to escape once, the combined might of Odin and the Asgardian Valkyries (all but one of whom lost their lives in the fight) proved strong enough to keep her contained.

Within the original comics incarnations and in animated adaptations, Hela is the treacherous daughter of Loki and ruler of Niffleheim.

Hela is Odin's first child and as well as Thor and Loki's older sister. She was in prison, but when Odin dies, the power imprisoning Hela fades away, allowing the Goddess of Death to escape, whereupon she meets her brothers Thor and Loki for the first time. Hela mocked Thor, saying that he did not resemble Odin at all. As Loki tried to make a truce with Hela, she mocked her adopted brother as well, saying that he was more like Odin than Thor. Hela then ordered her brothers to bow before her, prompting Thor to throw Mjolnir at her. However, Hela, more powerful, caught the hammer by its head with one hand and crushed it to smithereens. Thor declared such a thing was impossible as he watched his weapon be destroyed, but Hela stated that nothing was impossible when it came to her. Panicked by his sister's power, Loki commanded Fandral to take him and Thor back to Asgard, but Hela followed them close behind, leaping into the light of the Bifrost Bridge after the two, where she knocked Loki out of Bifrost Bridge after catching and throwing his knife back at him. She proceeded to chase after Thor, subduing and knocking him out of the Bifrost as well. Assuming the two princes of Asgard had died at her hands, she arrives at Heimdall's observatory not long afterwards.

Emerging into Heimdall's Observatory, Hela encountered Volstagg and Fandral of the Warriors Three, whom she promptly killed without mercy. Skurge, who had observed her murdering the pair from a distance, knelt when Hela approached him. Declaring him to be a "smart boy", the Goddess of Death offered him a job as her Executioner, (once her position) before crossing the Rainbow Bridge that led to Asgard. Upon reaching Asgard, Hela found the last of the Warriors Three, Hogun, and the Einherjar army waiting for her. She revealed her identity to them before giving them the chance to become her allies, but Hogun stated they would never recognize her as their queen and led the Einherjar in charging towards her. Hela, disappointed, proceeded to summon her weapons, known as necroswords, and engage the army in combat, using her powers to kill Hogun's entire army. After, with a horrified Skurge following, Hela made her way to the throne room, where she destroyed her father's mural and retrieved the artifact known as the Eternal Flame from his vaults. Using this, she resurrected her enemies as her loyal Berserkers along with her giant wolf, Fenris. She then fully dubbed Skurge as her Executioner, giving him a magical axe made of Obsidian.

To prevent her from renewing her conquest of the Nine Realms, Heimdal stole the sword he wielded to control the Bifrost Bridge. Discovering this, Hela began attacking the citizens of Asgard in order to make them give up Heimdal. Though she found his hiding place, she was too late to stop Heimdal from escaping her wrath.

Thor, Loki, Hulk and Valkyrie, dubbed as the "Revengers" returned to Asgard from the world of Sakaar where they had been sent in order to evacuate its people and fight Hela. Thor then headed to the throne room and waited for his sister. When she arrived, they discussed Odin and his faults before engaging in battle. During the fight, Hela inflicted a grievous wound on Thor, cutting out his right eye. She then forced Thor to watch as her undead army and Fenris attacked his allies and the remaining Asgardians on the Bifrost Bridge, but was surprised to see Loki to arrive with a massive ship and several Sakaaran gladiators they had befriended during their adventure. But regardless of reinforcements, Hela's army was still too strong to defeat. Hela began taunting Thor, claiming she would soon take Heimdall's sword and unleash her army on the Nine Realms. Thor, however, experienced a vision of his father encouraging him to unleash his full potential and that Asgard is not a place, but was in fact its people. Inspired and embracing his true nature, Thor unleashed a massive lighting blast, briefly stunning Hela. He then leapt down to the Bifrost to fight off Hela's Berserkers and rescue his people. Though she tried to kill the fleeing Asgardians, Skurge betrayed her and sacrificed himself to help keep Hela from killing anymore innocent lives.

Resuming her battle with Thor, Hela gained the upper hand and knocked him to the ground, even with Valkyrie helping him to fight her. As she goaded that Thor could not defeat her, Thor agreed, but said that Surtur, the fire demon, could. As Hela looked to see this, Valkyrie and Thor took Hela by surprise and knocked her into the water. When Hela reemerged from the water, she tried to fight Surtur, but her swords, no matter how large or how many, only annoyed the monster, and Surtur plunged his sword into her, killing both Hela and the kingdom of Asgard in the same blow.

Hela was the ruler of Niffleheim, the land of the dead. Captain America was transported into her realm and tried to convince him to stay. Hela was well aware of her father Loki's plans and played along with them, but knew her father very well, and was aware of eventual betrayal.

Hela negotiated with Captain America, and transported him to Asgard to aid his team, on the condition that should he fall in battle, his soul would belong to her.

At the Mansion, Cap saw a reflection of Hela on his broken shield just before he was ambushed by a Skrull imposter.

She was shown to be bored pairing her skeleton minions against each other until Loki arrives to cut a deal with her. In exchange that Hela lends Loki the Horn of Hela to control her skeleton minions, she can get entertained by watching Hulk and Thor fight each other. Loki ends up tricking Thor and Hulk into heading to Valhalla where Hela makes them fight each other. When Hulk even tried to attack Hela, she temporarily transformed him back into Bruce Banner and then transformed him back into Hulk. After letting Hela send them back to Earth to continue their fight there, Hulk and Thor fight Loki where they take a dive against him. Hela deems Loki the winner of the fight as she has the giant skeleton that Loki formed take Loki back to Valhalla to keep her entertained in his fight against her skeleton minions.

Hela the ruler of Hel alongside her pet 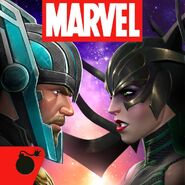