Taylor Hackford (1997-present)
Dame Helen Lydia Mirren, DBE, (née Mironoff), is an English actress and voice actress known as the voice of Queen Tuya in the 1998 DreamWorks animated film, The Prince of Egypt. 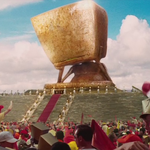 Deep Thought
(The Hitchhiker's Guide to the Galaxy)

Mother Ginger
(The Nutcracker and the Four Realms)

Helen Mirren behind the scenes of Monsters University.

Helen Mirren attending the 72nd Cannes Film Fest in May 2019.
Add a photo to this gallery

Retrieved from "https://disney.fandom.com/wiki/Helen_Mirren?oldid=4213256"
Community content is available under CC-BY-SA unless otherwise noted.