101 Dalmatians: The Series
Once Upon a Time

Hell Hall (a.k.a. The Old De Vil Place and often called De Vil Manor) is a location in 101 Dalmatians. It is the former manor home of Baroness Von Hellman and the evil lair of Cruella De Vil (and home of the De Vil family) located in Suffolk, England.

There was originally going to be a castle and was built in 1898, later abandoned in 1920; however, this never came to fruition when the first De Vil went insane and vanished. The house got its name from many chaotic parties. Cruella De Vil took up residence at Hell Hall with her henchmen Jasper and Horace. After her defeat, it was bought by the Dearly family.

In Dodie Smith's original books, Hell Hall is said to look like "an ugly face." Backstory suggests that the De Vil who originally owned it, when it was named Hill Hall, rented it to build it into a castle, but it is said to have gone mad before it came to fruition. Word says that when a mob came after him, he took off into the night with some claiming he had taken the form of a demon. Horace and Jasper sleep on mattresses in the lounge and spend most of the day watching television. The Dearlys buy the manor once the Dalmatians return, and it is renamed back to Hill Hall.

In Descendants: Isle of the Lost Rush, it is implied that Hell Hall already existed on the island or was rebuilt per Cruella's request. The basement holds unused dog supplies and crates with the now-gone fashion empire of the De Vils. Cruella forces her son Carlos to live in her fur coat closet, treating him like a slave.

In Disney Villains: The Essential Guide, it is stated that the roof has a gaping hole that lets rain pour in, the outside walls and window frames are riddled with woodworm and moss, and that the windows have not been cleaned since 1872.

In One Hundred and One Dalmatians, the property is only referred to by name from Sgt. Tibbs, claiming to have heard puppy barking at "Hell Hall." Despite the Colonel's skepticism of such a claim, asserting "No one's lived there for years!", the Captain immediately points out that "There's smoke coming from the chimney!", showing that maybe something is truly afoot in the ancient crumbling building after all.

Not much is mentioned about the backstory of Hell Hall, and there were rumors about the mansion being "haunted, or bewitched, or some such fiddle-faddle [and rot]." This De Vil mansion looks like its counterpart in the novel, but unlike the books, the Radcliffes/Dearlys do not move there in the second film, instead preferring a farm. Also in the movie, Horace and Jasper bring Pongo and Perdita's 15 puppies along with 84 more puppies bought from pet stores to stay for a few days.

The interior of the mansion clearly shows the degradation and decay as much as the outside. Ragged curtains, crumbling doors, dust sheet-covered furniture, a towering suit of armor, eerie silence and cracked drywall all create a foreboding atmosphere that would deter any intruder. Due to its decayed state, the manor' structure appears to be very sensitive to damage and loud noises, as seen when Cruella after threatening to call the police on Jasper and Horace slams the door so hard that it caused the wall to crack and a piece of dry wall ceiling to fall on Horace. This is seen more prominently when Horace after getting his rear set on fire runs him and Jasper into a wall, causing the ceiling above to collapse onto them.

In the remake, the place is called De Vil Manor. It is where Horace and Jasper harbor Pongo and Perdita's puppies along with 84 more puppies purchased from the pet shop. Later, after all the other Dalmatian pups have escaped, Skinner enters the mansion and notices Lucky, who was the only pup left behind due to being asleep while the others escaped. When Skinner attempts to grab Lucky, he is bitten in the behind by Kipper, enabling Lucky to escape.

The Dearlys later purchase and reside in the manor, giving it a Dalmatian color theme.

In this origin tale, Hell Hall was originally named Hellman Hall and is home to the wealthy Baroness Von Hellman, who hosts lavish galas and balls at her home. She previously lived with her husband, Baron Von Hellman, until his death. Estella and her adoptive mother Catherine visit the home when Estella is around eight, and she witnesses the Baroness murdering her mother at the cliffs via her three Dalmatians. As an adult, Estella learns that she is the Baroness' long-lost daughter who was born in the Hall. She is set to inherit the family fortune and expedites the process by faking her death at the hands of the Baroness, who is arrested for the crime. Estella secretly survives the Baroness' push off the cliffs by using a skirt trimmed into a parachute, though "Estella Von Hellman" is officially deceased. She dons the moniker Cruella de Vil, who inherits everything from her dear friend Estella. Cruella takes her place in the Hall, but not before removing the words "man" from the gate's title; thus, renaming the manor to Hell Hall. She moves in alongside her best friends Jasper and Horace, their dog Wink, her dog Buddy, and their friend Artie. Also in the Hall is John the Valet, a trusted friend of Cruella's.

In 101 Dalmatians: The Series, Hell Hall is omitted and replaced by Villa de Vil, located next to the Dearly Farm. The house has a more castle-like appearance and is enormous. Whilst the main halls and rooms are shown to have red walls and checkered flooring, it contains a vast number of rooms such as Cruella's office, a couple of bedrooms, a basement, an enormous wardrobe, a laboratory, various bathrooms, a gym, a sauna, a dining room, a family portrait gallery, kitchen, and lounge.

The exterior has a lawn covered with multiple statues and a swimming pool in the shape of Cruella's face.

In Once Upon a Time, Hell Hall appears only in flashback into 20s London world like the property of Madeline and her daughter Cruella. It was temporarily visited by the Author Isaac Heller, who rescued and fall in love with Cruella, a prisoner of her own mother. Ironically, it was revealed that Cruella was imprisoned to protect the world from her sociopathic tendencies.

In the video games, Hell Hall is referred to as "DeVil Manor."

In 101 Dalmatians: Escape from DeVil Manor, Whizzer and Patches escape from the library and explore the rooms, trying to find an escape route. These rooms include a foyer, a hallway, a kitchen, a dining room, Cruella's childhood bedroom, a master's suite (with bathroom), the bedroom of Cruella's Nanny, and a drawing-room. If Whizzer and Patches make too much noise, and can't find a hiding space in time, Horace or Jasper throws them into the game room. This room offers one method of escape, along with a pipe from the roof (which you can gain access to via the attic). Once Cruella is defeated, Roger and Anita move into the manor.

In Animated StoryBook: 101 Dalmatians, the first time that the player sees the manor is during the "Twilight Bark" page, where if they click it, an ominous moon rises and bats fly from it. Players can then help Kipper unlock the gates to the manor by deciphering the animal noises to type in the password. Once inside, Kipper and the players search for the puppies, searching the library, an old bedroom, and the attic, looking for clues that the puppies give, unlocking secret passages along the way. The pups sing a song, "Up the Stair," whilst inside, hiding from Horace and Jasper and trying to find a way out.

In 102 Dalmatians: Puppies to the Rescue, Sgt. Tibbs is sent by the Colonel to guide Domino and Oddball through the area. Horace Badun is dozing by the television (which will show a screenshot of a newspaper from the "animated film" if you bark at it). Tibbs sabotages the clock to make a loud noise that would wake Horace before the player Dalmatian leads him under the chandelier (which Tibbs proceeds to drop on him). As the pup explores the manor, they can find hidden rooms behind portraits or push the desks to make them move.

Hell Hall also appears in the book Descendants: Isle of the Lost Rush, where it is stated to be on the Isle of the Lost, either having been there already or rebuilt there at Cruella's request.

Mal can convince Carlos to throw a frat party there for the other students of Dragon Hall while Cruella is away on a spa trip.

It is claimed that Cruella forces Carlos to sleep on a lumpy mattress in her dressing room, which is accessible through her fur coat closet. There's also another door that Carlos uses to bypass the bear trap security system.

Carlos also uses the basement (filled with many canine items from Cruella's plans) as his lab to conduct experiments, such as trying to get through the barrier that leads to the Auradon. 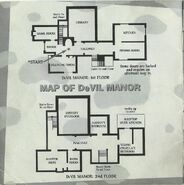