To escape the Nightmare Realm and bring about destruction on Earth

Forcibly sucked back into the Nightmare Realm along with the rest of Bill's chaos
The Henchmaniacs are a group of interdimensional demon criminals who reside in the Nightmare Realm. They all serve under Bill Cipher, a fellow demon who brought them together and helped release them onto Earth. The demons serve as antagonists during the Gravity Falls finale event, "Weirdmageddon".

The demons all indulged in various criminal activities across their respective dimensions before they eventually came to reside in a crawl space known as the Nightmare Realm. When a demon named Bill Cipher came into the dimension, they were all united under him and after Bill took it over, with Bill promising them that he would use the realm's connection to the Mindscape to enable them access to Earth.

The demons make their first appearance as silhouettes seen in the episode "The Last Mabelcorn" when Bill is communicating with them through the Dreamscape. Near the end of "Dipper and Mabel vs. the Future" Bill (in Blendin's body) tricks Mabel into giving him the rift which he then immediately smashed, creating an opening into Bill's world.

In "Weirdmageddon, Part 1", Bill finally brings the demons to Gravity Falls, Oregon and they prepare to cause havoc. When Ford Pines attempts to shoot Bill back into the rift with his quantum destabilizer, he misses and is captured by Bill who turns him into a golden statue as the demons watch. Avenging Ford, Dipper Pines confronts Bill but is overpowered by him. Bill then tells 8 Ball and Teeth that they can eat Dipper for a snack. However, Dipper is able to get away. Bill then converts a car into a sleek ride for himself and his friends to the Fearamid. Later in the episode, the demons party at Bill's Fearamid using the townsfolk as entertainment, and witness Bill vaporize Time Baby and the Time Police after the group arrives trying to arrest the demons.

In "Weirdmageddon 2: Escape From Reality," Bill's friends attempt to leave Gravity Falls to spread their chaos across the world, only to collide with an invisible barrier. Bill decides to inquire Ford how to get out since he is the only one who knows how.

In "Weirdmageddon 3: Take Back The Falls," the rebel group from the Mystery Shack encroaches upon the Fearamid using the Mystery Shack-converted Shacktron. Bill sends his henchmaniacs to fight off the mech, growing to colossal size as they do. Eventually, the Shacktron defeats all the demons and allows the rebels to enter the Fearamid. However, after Bill destroys the Shacktron, the demons corner the remaining rebels. Following Bill's defeat, the demons are sucked back into the nightmare realm. 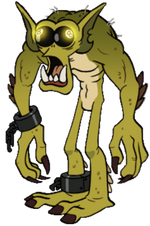 A green lanky demon covered in shackles with magic 8-balls for eyes. It along with Teeth attempted to eat Dipper, but failed to do so. It was partially petrified by an Eye-Bat while fighting Shacktron.

A demon composed of many colorful squares. It was one of the only demons that didn't participate against the fight against the Shacktron.

A red hexagon-shaped demon with a tie, hat, mouth and mustache. 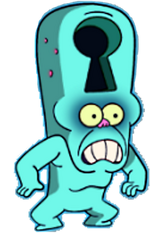 A diminutive turquoise demon with a large forehead containing a keyhole-shaped hole.

A square-shaped demon with one eye similar to Bill.

A dark grey infant-like demon with two large horns, a cross marking and a pacifier on its stomach, which conceals a second face.

A demon that is a set of teeth with stout arms and legs. It along with 8-Ball attempted to eat Dipper but failed. 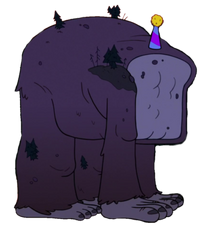 Also known as The Being Whose Name Must Never Be Said, it is a large, faceless behemoth.

A lava lamp shaped demon, who's name was never listed. It was another demon that never participate in the fight against the Shacktron.
Bats, from the Nightmare Realm, with wings that act as surveillance and turn people into stone.

Retrieved from "https://disney.fandom.com/wiki/Henchmaniacs?oldid=4221783"
Community content is available under CC-BY-SA unless otherwise noted.