This article is about the The Country Bears character. For other characters with the same name, see Henry (disambiguation).

"Howdy, folks! Welcome to the one and only, original Country Bear Jamboree, featuring a bit of Americana, our musical heritage of the past."
Henry is a 7-foot-tall brown bear who serves as the master of ceremonies of the Disney theme park attraction Country Bear Jamboree. He also appears in the 2002 feature film based on the attraction

He typically dresses in formal wear, including a top hat that his raccoon companion Sammy is sometimes seen on. He's occasionally paired with Wendell, forming a comedy duo with him

It's implied in the shows that he has a backstage romance with fellow Country Bear performer Teddi Barra.

In the early Bear Band treatments of the attraction, Henry was only known as the "MC Bear". Henry would derive his name from Henry Jaynes, half of a hillbilly musical comedy duo called "Homer and Jethro", whose songs would be used for Henry and Wendell's segments of the show. By taking the name Henry, this allowed the Imagineers to keep much of the written banter of the original songs intact.

Henry, master of ceremonies at the Country Bear Jamboree, stands six feet tall in his stocking paws. He is another famous football player who entered show business. Henry was formerly with the Goose Creek Bruins. One day they tried a hidden ball play, and Henry hid the ball so well he couldn’t find it. This hastened his transfer to music. For a while, he had trouble finding a melody, too. But Henry is a likable sort, and audiences go for him like he goes for honey. For a finale, Henry sings Ballad of Davy Crockett with Sammy, his live raccoon hat. Henry is glad he turned in his football gear for a starched shirt and Sammy. “After all,” he explains, “I never knew a football helmet that could sing like Sammy.”

Henry Dixon Taylor was the manager for the Country Bears band, having discovered them during his time as a construction foreman and seeing them perform during lunch breaks. Henry is also the owner of Country Bear Hall, where he leads guided tours of the historic theater. With the band falling into obscurity after their break-up, he has fallen into serious debt with Reed Thimple's bank. Having nearly given up hope, he ends up working with young Country Bears fan Beary Barrington to go reunite the band.

In Walt Disney Comics Digest #32, printed in 1971 to promote the opening of the Magic Kingdom, Henry and the rest of the Country Bears were the central focus of the Frontierland story. When Teddi Barra, Big Al and Ernest decide to play hooky to go have a picnic on the Rivers of America, Henry enlists the help of Mickey and Donald in trying to get them back in time for the show. This story would later be reprinted under the title of "Mickey and Donald in Frontierland" in IDW's Magic Kingdom Comics special digest for the Disneyland 60th Anniversary.

Outside this, Henry and the Country Bears would also appear on a Frontierland variant cover for IDW's run of Uncle Scrooge.

Henry serves as the Master of Ceremonies for all three iterations of the Country Bear Jamboree. Throughout the show, he not only introduces some of the acts and their performers, but takes part in some acts, singing songs like the "Bear Band Serenade" , "The Ballad of Davy Crockett", and "The Fractured Folk Song", just to name a few.

In the Country Bear Christmas Special, he's added a sprig of holly to his top hat as well as a scarf to his normal attire, opening the show with his own rendition of "It's Beginning to Look a Lot like Christmas". He also leads the Five Bear Rugs in performing the show's main theme, "Tracks in the Show", as well as the finale medley consisting of "Let it Snow", "Rudolph the Red-Nosed Reindeer", and "Walking in a Winter Wonderland."

In the Country Bear Vacation Hoedown, Henry trades in his tuxedo and top hat for Scout Master's hat and his old Camp Grizzly T-shirt, which barely fits him, At the end of the show, Randy the Skunk winds up sitting and tap-dancing on Henry's head, much to the bear's chagrin.

Henry as he appears in the Country Bear Christmas Special.

Henry as he appears in the Country Bear Vacation Hoedown. 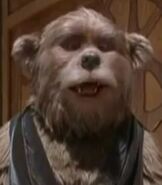 Henry as he appears in the movie.

Retrieved from "https://disney.fandom.com/wiki/Henry?oldid=4372049"
Community content is available under CC-BY-SA unless otherwise noted.