Roaring, having fun, being with friends, helping others, Summer's shows, Cobby's inventions, Ivor laughing, being with Daddo

Things that go wrong, being harassed, Summer mad at him

Henry is very fun-loving and is more of an idealistic character. Whenever there is a problem, Henry is always there to solve it. He might also point out to someone how someone else feels.

Henry likes to roar, and his roar is what makes him "Henry Hugglemonster".

When things go wrong and Henry is under pressure or cannot think straight with many noises, he needs a "Hugglebreak" which he flies up, clears his head and flies down to make things right.

When there is someone who is sad or upset, Henry will cheer them up to make them feel better.

Henry has a standard catchphrase he uses called, "Roarsome", when he finds something exciting. 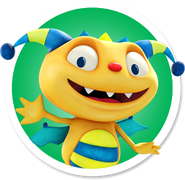 The Disney Wiki has an article focusing on the relationships of Henry Hugglemonster (character).

Retrieved from "https://disney.fandom.com/wiki/Henry_Hugglemonster_(character)?oldid=4249005"
Community content is available under CC-BY-SA unless otherwise noted.