Disney Wiki
Register
Don't have an account?
Sign In
Advertisement
in: Characters, Males, Pirates of the Caribbean characters,
and 11 more
English

Henry Turner is the deuteragonist of the 2017 Disney live-action film, Pirates of the Caribbean: Dead Men Tell No Tales. He is the son of Will Turner and Elizabeth Swann.

Henry is an intelligent and serious young man, who has dedicated his life to find a way to free his father.

Initially, Henry was an excitable child who would sing shanties and songs of pirates as he waited in the hopes of seeing his father, this pushed him to research ways to break his father's curse.

Henry does not detest pirates as shown when he seemed to idolize Jack after searching him out to help him free his father from the curse, however when he realized how Jack truly was he was disappointed, though he gradually came to see him as the great pirate he was when Jack saved him and helped him win over Carina Smyth. In the end, Henry became a friend of Jack like his parents before him.

Because of his father's curse and tales of his parents' adventures, Henry fully believed in the world of supernatural and criticized others for not believing in them. This was seen when he told Carina about it though was ignored but this changed when seeing Captain Salazar along with his undead crew. Henry gloated about being right to Carina and was seen jokingly asking if her opinion changed.

Born after the battle with Cutler Beckett, Henry was raised by his mother though he was told of his father's circumstances. As a young boy, he eagerly awaited his father's return as he sang a pirate song just as his ship appeared and he met his father for the first time.

Two years later, Henry studied the myths of the sea and found a way to get his father back as he was unsatisfied at seeing after a decade. Henry threw himself in the water and was on the Flying Dutchman where he met his father who reprimanded him for his actions. Will tried to scare Henry into giving up with his appearance but the latter was not fazed as he voiced that he wanted his father home.

Henry stated he would find Jack Sparrow and get the latter to help him but Will forbade his son from finding him. Will gave his son his necklace and told him that to forget about him as he returned him to the surface before Dutchman submerged.

When he grew up, he became a sailor in the Royal Navy, eventually deciding to find his Jack Sparrow and get him to help free his father from his curse, an obligation to sail the Seven Seas for all eternity as captain of the Flying Dutchman.

During his adventures, Henry encountered the terrifying ghost crew led by Captain Salazar, who requested him to find the known pirate Jack Sparrow which Henry was planning to already do.

Henry infiltrated the prison disguised as a guard, he went from cells looking for Jack Sparrow but was turned away each time. He soon reached one where he was grabbed by a man demanding a sword, he told the prisoner he was wanted for treason and was looking for Jack Sparrow before he was released. He then learned that he was speaking to the very man he was searching for.

Henry was disappointed as he searched for years to find out Jack was merely a drunk and pantsless man even asking if he really was who he said was. Jack turned this around and questioned him on his identity, as Henry introduced himself as the son of Will Turner and Elizabeth Swann. Henry then realized it was Jack Sparrow after the latter expressed familiarity with both his parents' names.

After talking a while, Henry requested Jack's help in freeing his father by locating the Trident of Poseidon but Jack was uninterested even falling asleep but Henry caught his attention by mentioning Salazar was resurrected and coming for him. Henry told Jack that only the trident can help him and he decides to become allies with Henry and is told he needs to free a woman as well who can lead the way.

The next day, Henry serves as the distraction for Jack and Carina's execution before Jack's crew (who Henry paid) arrives and holds off the guards. Henry himself saved Carina from being hung by catching her (though in a comprising manner) and asking her to aid him which she begrudgingly agreed.

With Jack and Carina, he fled the area with the crew as more guards appeared.

During the adventure, Henry acted as a lookout for Jack's crew but was annoyed by Jack's inactive nature. Also, he forms an association with Carina and their talks show some feelings for each other which Jack pokes fun at.

When Jack's crew learns they are being hunted by the dead, they put him, Carina, and Henry in a rowboat. As the enemy crew follow them, Henry watches as Carina swims to land as he and Jack are forced to deal with the attacks of Salazar. Once Jack and Henry reach land, Carina sees Captain Salazar and his undead crew which left her in disbelief that such things actually existed.

As Henry and Jack traveled the forest, Jack poked fun at Henry's feelings for which annoyed him. The two soon heard screaming and find Carina trapped in a net and she begs Henry to free her, he moves to do so but he and Jack are in a caught in a net too. Two pirates show up and knock Jack out.

When Jack awoke, he found Henry and Carina tied up before he came face to face with a pirate named Pig Kelly who owned the island and was owed money by Jack. Kelly intended for Jack to marry his sister to pay his debt while making Henry and Carina the best man and maid of honor.

Jack was unwilling to go through with it even ignoring the threat of death, as Carina and Henry tried to help him but to no avail. Fortunately, Hector Barbossa and his crew arrive and he dispatches Kelly and his men, freeing Jack's group from the wedding.

Henry then witnessed Barbossa freeing the Black Pearl from its bottle prison and was amazed by it. Henry was tied to the mast along with Carina as he sailed on the ship his parents once sailed on.

As they climbed the anchor, Salazar pursues them, and Barbossa makes the decision to sacrifice himself after he is given a sword by Jack and promptly lets go of the anchor and stabs Salazar on his way down. Henry watched Salazar die after hitting the bottom of the anchor face first and witnessed both Salazar and Barbossa were washed away by the rushing sea.

Afterward, Henry watched Carina's sad expression before Jack gives him Carina's diary so he could win her over. With the book, Henry comforted her over her father's death before giving her book and calling her "Miss Smyth" but she corrects him by taking on her father's surname Barbossa.

Henry and Carina were dropped off at Henry's home where Henry acknowledged Jack was right about his feelings for her and tries to kiss her but earns a slap from her as she was checking if it was him. They share a joking banter and Henry kisses Carina, which she returns. He is reunited with his father who was freed of his curse and they catch up before Henry's mother Elizabeth Swann shows up and reconnects with Will.

Henry held Carina's hand as they watch this scene. With this, Henry had both his parents and had a new girlfriend.

In the non-canonical video game adaptation of the Pirates of the Caribbean film series, Will and Elizabeth's son is seen playing with a toy version of the Flying Dutchman when his father Will returned. Unlike most characters, he only appears in one scene which is the ending cutscene for the At World's End campaign. Therefore, Henry is not an unlockable, playable character, even when after completing the aforementioned campaign. 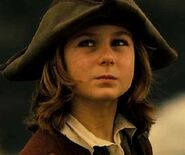 Young Henry in the epilogue of World's End.

Henry sinking down into the ocean.

Henry aboard the Flying Dutchman.