Disney Wiki
Register
Don't have an account?
Sign In
Advertisement
in: People, 1940s births, People from New York,
and 30 more

2
Henry Franklin Winkler, OBE is an American actor, director, comedian, producer, and author, who is best known for his portrayal of Arthur "The Fonz" Fonzarelli in the long-running ABC television sitcom, Happy Days (1974-1984), for all 11 seasons.

His Disney roles include portraying Stanley Yelnats III in Holes and voicing Mr. Snowman in the Penn Zero: Part-Time Hero episode, "North Pole Down" and Grandpa Quill in Guardians of the Galaxy. He also portrayed Coach Klein in the Touchstone Pictures film, The Waterboy and Uncle Joe in The French Dispatch. Additionally, he voiced The Principal in Kick Buttowski: Suburban Daredevil, Santa Claus in Puppy Dog Pals, the Bailiff in the Ducktales episode "The Life and Crimes of Scrooge McDuck!", Uncle Dieter in Vampirina, and voices Fritz in Monsters at Work.[1]

He is the cousin of stand-up comedian and actor of NBC's Homicide: Life on the Street, Richard Belzer. 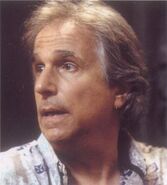 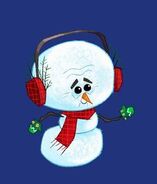 Henry Winkler poses in the Press Room during the 70th annual Emmy Awards in September 2018.